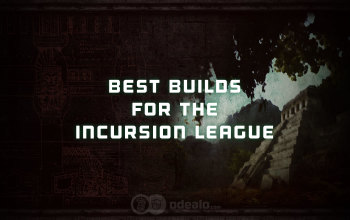 Check our recommended PoE builds for the Incursion League. On top of popular and tweaked builds, we are adding new interesting builds

Patch 3.3 looks like one of the most interesting Path of Exile updates in quite some time. This time as an Exile you will be traveling back in time to when Vaal Temple was built. By exploring it, you will be altering the future. After 11 completed Incursions you will be able to visit your "self-designed" Vaal Temple in the present times. The layout of the map and final rewards will depend on your actions during those previous 11 Incursions you have completed. After clearing the Vaal Temple, you will be able to start your Incursions all over again. This mechanic seems like the most interesting end-game content in Path of Exile that has been introduced in a long while.

As usual, we are getting new interesting unique items, skill gems and several new build options have emerged from the 3.3 Patch. Because of vast skill balancing, the nearly forgotten Vaal skills and Ignite mechanic will shine again. Both have been buffed and thoroughly redesigned. Obviously, Ignite builds are going to be extremely popular in Patch 3.3. Multiple Fire-based skills have been improved and will deal increased Burning Damage, and will also have increased chance to Ignite. On our list, you will find one Ignite build, one Vaal-based build and three either new or tweaked builds you might be familiar with from the previous patches; builds that are based on popular playstyles, but have received minor tweaks along with the 3.3 Patch.

Bleed Tornado Shot Deadeye - Tornado Shot builds are the most popular Path of Exile builds out there. Patch 3.3 will not change that so obviously, and Tornado Shot owns one of the spots on our Top 5 list. We have decided to alter the build and approach it differently this time. This is a pure-physical Bleed build that utilizes the immense amount of arrows shot by the Deadeye class, and Crimson Dance passive node to apply multiple Bleeds on your target

Vaal Double Strike Gladiator - Gladiator is a very solid PoE Ascendancy class. It's perfect to start a new League with, with good defenses and high DPS with pretty much any random rare gear. Our Bleed revolves around the redesigned Vaal Double Strike skill and Bleed explosions for very good AoE

4.
Chin Sol Blast Rain Trapper - with the complex rework of Traps in Patch 3.3 we have decided to include one of the best Trapper builds on our list of the best Incursion builds. This build provides amazing AoE and insane burst damage

5.
Freezing Pulse Elementalist - amazing starter build for Patch 3.3 and Incursion League. Freezing Pulse has now much higher damage, and the build itself is a great and budget-friendly spell-caster build. It easily allows you to clear mid-tier maps on a very tight budget and can scale well with end-game gear

Below you will find other interesting niche builds, that lost their place on our Top 5 Best builds list. While still very powerful their high item requirements, complexity, and lack of smoothness made us replace them with simply better builds.

Burning Arrow Berserker - is our recommended Ignite build for patch 3.3. Berserker class provides the highest raw DPS bonuses out of all classes and insane Life and Mana Leech bonuses. Also, the increased damage received is nullified to a great extent by fighting from a distance. Also, the range of your attacks and DoT mechanics of Ignite will allow you to progress faster in maps and gain Rage at a much faster pace

Disintegrator EK Cyclone Juggernaut - fast and deadly melee fighter. It is a Physical DPS build based on the Elder unique staff Disintegrator and Cast on Melee Kill mechanic which will cast Ethereal Knives for amazing AoE and clear speed

We hope you will enjoy the new League with one of our builds, or at least we have given you some interesting ideas for your build. If you have any suggestions about other interesting builds for Patch 3.3, please let us know in the comments below. We will be adding more 3.3 builds throughout the Incursion League.