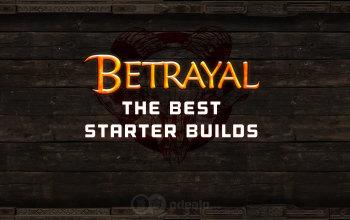 The Best 3.5 Starter builds for the Betrayal League

Our list of the Best Starter builds and the most interesting builds for the Betrayal League and Patch 3.5

Betrayal League is launching soon alongside Patch 3.5 Major content update. This is the biggest update of 2018, and a lot of changes will be introduced including:

Below, we are presenting the best 5 Starter Builds for the Betrayal League, based on our experience and upcoming changes. We have decided to include one build of each of the following types: Melee, Ranged, Spellcaster, Minion, Miner to give you a bit more diversity. They are not set in any particular order, so don't strictly expect the first build on the list to be the very top one.

Also, since there are a lot of new skills, items, and other major changes. We are also presenting the five most interesting new builds that are worth trying out in 3.5. Hope you guys enjoy it!

1.
The Ultimate Molten Strike Gladiator - Molten Strike is the best melee skills in the game, and Gladiator is an extremely durable character, that provides amazing defenses regardless of your items. Molten Strike itself has been reworked in 3.5, it now has increased damage, but the number of Wildfire Jewels you can equip is limited to 1, and the number of additional projectiles granted by Eternal Labyrinth Helmet enchantment is reduced by one. These changes have a slight impact on the earlier phases of the game, and with the removal of stat-tick weapons, Molten Strike still remains your number one pick for Melee builds

Glacial Cascade Miner - with no changes to Glacial Cascades, this still will remain one of the most powerful builds in the game. It is amazing right from the start, and with end-game gear it lets you solo any Boss in the game. Miners provide quite an unusual playstyle, by planting Mines that are remotely detonated and deal very high both single-target and AoE damage

3.
Dominating Blow Herald of Purity Guardian - Dominating Blow Guardian has not been changed in 3.5. It still remains a very solid Minion build, with amazing defenses and very high single-target DPS regardless of your items. This build scales very well into late game as well and gets better with all the currency you invest in it. It's based on the recently introduced Herald of Purity skill and Domination Blow Attack, where both of the skills summon Minions to fight alongside you

Crit. Arc Inquisitor - the only Spellcaster build on our list. Self-casting has not been addressed in 3.5, and a lot of spellcasters were hoping for that, but at least Arc has not been nerfed, so this still remains one of the best Spells for beginners. This is a budget-friendly build with high DPS and good clear speed thanks to Arc's chain mechanic

Toxic Rain Pathfinder - extremely popular Starter build that was introduced in Patch 3.4. The build requires literally no specific unique items, yet it allows you to swiftly progress through the campaign right into Maps. Quill Rain that was the core (and the best in the slot) weapon for this build is getting slightly nerfed, as it now reduces your damage globally instead of reducing your damage with the weapon itself, hence reducing the damage you deal with Poison as well, but Toxic Rain Pathfinder still remains an exceptional pick for a League Starter build.

Blade Flurry Low-Life Occultist - one of the most powerful Witch/Melee builds in the game. It is based on the reworked Occultist Ascendancy and reworked Crown of Eyes and Auxium unique items. With proper gear investments, this build can farm all the content with ease

Cospri's CoC Ice Nova Assassin - fast and powerful build based on Cospri's Malice and Cast on Critical Strike Support Gems, which trigger powerful Cold Spell with an astounding frequency. Patch 3.5 introduced big changes to most of the Cold Spells, and this build is very flexible in terms of Cold Spells choices, and at the same time, both cooldowns on CoC Gem and Cospri's Malice have been greatly reduced

3.
Winter Orb/Ice Spear CwC Inquisitor - we call this build the "Teleporting Turret". It's one of the best, and the most enjoyable builds in Patch 3.5. Amazing clear speed, single-target DPS, and mobility in Maps with the Lightning Warp Spell. Definitely, a build we will work on for a bit longer to see how it ends up

Lancing Steel Impale Champion - a powerful Ranged Champion build. Lancing Steel is a Projectile-based Attack which inflicts Impale for extra Physical DPS. Also, the Champion Ascendacy class has received a new Passive which increases the effectiveness of Impale, making it the best class for this Impale build

Armageddon Brand Elementalist - this is in our opinion the best Brand build in Patch 3.5. While we didn't do excessive testing yet, and new intriguing combinations may be revealed as the League progresses, this is what we recommend if you want to try out this new enjoyable playstyle. Brands are a completely unique type of spells, which attach to monsters and deal periodically Fire Damage in a small radius. After killing enemies, Brands are left on the ground and can either attach to other monsters, or you can recall them with a special Spell

If you got any suggestions for other powerful Starter builds for the Betrayal League please let us know in the comments below. And see you soon in Wraeclast! If you want to share your thoughts about the Betrayal League and Patch 3.5 just join the discussion!