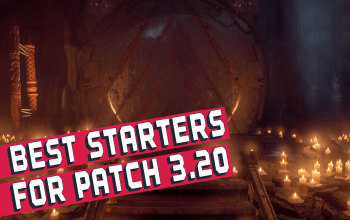 Our list of the best Starter builds for the upcoming Patch 3.20

The Forbidden Sanctum expansion is launching within the next few days, so it's about time we give you our opinion about what can be expected from this promising League. The core mechanic takes you on a journey to discover the Forbidden Sanctum which hosts new Boss encounters and unique rewards. The way you are going to explore it resembles roguelike games, with simple choices you will have to make along the way. Those shall determine the difficulty and rewards. Your character will also have a completely new and unique "resource", completely separate from the main defensive mechanics PoE has to offer, which will run out as you get hit by monsters, and once depleted, have you start all over again. It all sounds really exciting and hopefully will suffice to make this one of the best Leagues ever, even without too many interesting balance changes. We still hope that the few nerfs here and there, and a major change to the Curse system can somehow shift the meta in 3.20 - time will tell.

Let's get down to business and talk Starter Builds. Before we present you with our picks, let us state that the Toxic Rain, Corrupting Fever Duelist, Poisonous Concoction Ranger or Occultist, Righteous Fire Inquisitor, Explosive Arrow Elementalist/Champion, are all still exquisite, and we cannot recommend them enough. However, if you've played them already, or you want to pick something else that's not as overused, and equally good (if not better) this is a list for you. We've selected builds that are easy to level up with, and relatively powerful for their price, which are important qualities for a Starter.

The Forbidden Sanctum expansion introduced a few nerfs, most notably to Spectral Helix, Lightning Strike, Lightning Conduit, and other indirect ones to some Minion builds or the usage of a Withering Step to refresh the Elusive buff. Inquisitors and Occultists are also a bit weaker. keep that in mind while selecting a character.

What builds would perform well in this League? It's hard to say - the League mechanic is nothing out of the ordinary, but the Atlas changes are quite significant. Farming Maven instead of altars may be good, the same goes for Harbingers and Einhar's beasts, but it's tough to predict such shifts in meta.

Please note: not all the builds are updated for Patch 3.20, but they all are in the state which will allow you to get started while we complete their updates

All the Builds, and the ones included in the beginning too, are available on our website. Links can be found in the description of this video as well as in the article here. We will try to have them all up and ready for the current Patch so that you can start with them on day one. Let us know if there's a build you'd like to see too, we might have it.

We're currently expanding our build library with leveling guides, publishing new builds regularly, and updating the old ones. We will also keep an eye on the freshly-reworked Unique Items and new skills, especially the Frozen Sweep, it looks really unique and promising.

We tried to condense a lot of information here, but if you haven't read the Patch Notes, we encourage you to do so to avoid unpleasant surprises, but generally, the pageant of meta Starter builds stays in the exact same spot as it was a League ago.

If you enjoy this type of content subscribe to the channel, at the end of the league we usually publish some off-meta niche stuff that you might find interesting. Your suggestions are an integral part of our channel and website, and so we heavily encourage you to leave feedback in the comments. Good luck.

If you have any other Build requests please leave that in the comments below.