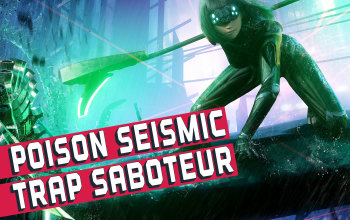 One of the best Trap Builds out there, perfectly suitable to kill the strongest Bosses on minimal investments

Seismic Trap is one of the signature Trap Skills that have a Cooldown. When it's triggered, it pulses with powerful explosions all around itself for a limited duration. You can't spam with this Skill all the time, as you will quickly run out of charges. This downtime gives you an excellent opportunity to focus on dodging and repositioning during the Boss fights, which is where the build shines the most.

Seismic Trap is well known in the Path of Exile' community for being one of the strongest Spells out there when it comes to single-target damage. Many players were cautious about this Skill when it got a significant nerf in Patch 3.19, but as it turned out, it's still very good. In this iteration of the build, we are recommending the Poison variant.  Poison is a damaging Ailment that deals Damage over time based on the Physical and Chaos Damage, which this Trap has plenty of. It also works very well with multiple Hits, as every explosion will apply yet another stack of Poison. The final result is a massive Damage over Time effect that ramps up pretty quickly, at a minimal effort and gear investment. Due to being Cooldown-based, it would be unwise to rely on it for both single-target and Map Clear. To help with that, you should use Exsanguinate paired with Trap Support. Tendrils created by that Spell can very easily cover great areas to quickly kill all weak monsters in sight, and you can spam this Skill to your heart's content.

The defensive side of this build is also nothing to be shy about. Thanks to the Grace, Determination, and Saboteur's Blind aura,  you will be very safe against all Attacks, while easy access to high Spell Suppression will take care of rest. Furthermore, you will be immune to most Ailments without any effort. The Trap playstyle is very safe by itself, as you won't be locked in place for a long time.

The build is very affordable, as most of the Damage comes from the Skill mechanics itself. It has a pretty clear upgrade path, so you can easily become stronger and stronger with every investment you make.

For your regular Mapping, you will be quickly moving around the Map with Whirling Blades and killing whole packs of monsters with Exsanguinate Traps. Thanks to their autotargeting, you don't even need to aim too much, just enough to trigger at least one Trap.  When encountering Bosses or other tough enemies, use your Seismic Trap to take them down in the blink of an eye! Wither cast by your Totems will dramatically increase the Damage they take, and you can automate your Curse setup via Arcanist Brand or your Gear itself.

Going through the campaign is a very easy task when playing with Traps. At first, you might want to stick to Elemental Traps and switch to Seismic Trap once you have a high enough level to properly support that playstyle. Lightning Trap and Ice Trap are both very good and scale with all the Trap Passives you will be taking in the Passive Tree anyway.

To begin with this Build you need literally no Gear at all. All the initial power comes from your Skill Gems and Passive Tree. Of course, that doesn't mean you won't equip anything at all. There are plenty of very strong Unique Items that boost your Damage to absurd numbers, such as Cold Iron Point or Ming's Heart. The very first Unique you should aim for is The Devouring Diadem. Thanks to this Helmet, you can use additional Aura in your setup and save a few Passive Points in your Passive Tree.  In the meantime, you can try to obtain Deerstalker Boots that will grant you a pseudo 5-link setup for your Exsanguinate. You will probably want to replace it later on with a pair of Rare Gloves that also has a built-in Trap Support, but you don't need to hurry with that. The rest of your Gear should be focused on maximizing your defenses. Getting Life, Attributes, Resistances and a bit of Spell Suppression shouldn't be a hard task, as you don't need to worry about Damage affixes in most cases. Getting a bit of Life Regeneration is also very useful, as you can't Leech, but it's not that important.