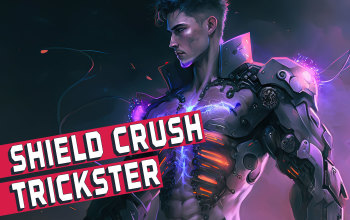 Trickster is one of the most durable Ascendancies in the game, its Keystones are remarkably good at mitigating damage or increasing survivability indirectly. This build capitalizes on Escape Artist and Soul Drinker for a massive bonus to Evasion and Energy Shield, Energy Shield Leech that does not stop after filling, and Attack/Cast Speed. With the abundance of Energy Shield and Evasion, it's reasonable to pick up Ghost Dance - after getting Hit it will instantly recover Energy Shield. That's not all, here we're also investing heavily in Armour which comes mostly from a Shield, Flasks, and Determination Aura. The Shield in question is Emperor's Vigilance. It requires some Maximum Life too, but in turn, offers superior stats comparable to a very good Rare one. Glancing Blows double your Block Chance, which is good since the damage taken from blocked Hits will get instantly recovered via Ghost Dance Keystone anyway. To top it all off, there's also Fortify.

The build is capable of easily capping Attack Block Chance and reaching very high Spell Block Chance, but the main defensive layer against Spell Hits is Spell Suppression, which here should equal 100%. With almost 40k of Armour and Evasion, it's reasonable to pick the Persevernece Belt for around 200% increased Attack Damage. The rest of the damage is granted by Shield Crush - a unique Attack Skill that sourced its damage from Shield's Armour rather than Weapon's Attack. The aforementioned Emperor's Vigilance is a Shield with a lot of Armour, even when compared to rare counterparts, and it's also relatively cheap. Shield Crush will deal here Cold Damage converted by Hrimsorrow Gloves. Cold Damage is easier to scale up and won't require Impaling. It's a build that uses some cheap Unique Items, later can accommodate even more of them, that's why it's good as a starter - these items should be already inexpensive on day two of a new league.

The build uses Shield Crush to deliver damage, it's a simple Attack, just be sure that you stand close to the target to benefit from overlapping waves. To boost your damage use both Ancestral Totems, apply a Curse, and Expose the enemy to Elemental Damage via Frost Bomb or Hydrosphere. For a Curse use Assassin's Mark with Mark on Hit, or Frostbite - Mark is good later in the game after accumulating a high Critical Strike Chance via global Attack modifiers. Flame Dash and Molten Shell are basic Guard and Mobility Skills used in a majority of builds, here too. For Auras use Grace, Determination, and Defiance Banner. These Auras grant a lot of Evasion and Armour. To upgrade your Damage use Precision and/or Hatred, but be careful, you will need some extra Mana Reservation Efficiency to do so.

The unique Shield we mentioned earlier requires Level 46, but even before that, it would be hard to get meaningful damage out of Shield Crush. As a Trickster, you can take advantage of other passives near your starting location - Traps, Mines, or Chaos Damage. We recommend using a Cobra Lash as it's an Attack that you can also upgrade by multiple Claw/Dagger Passives. It fires a fast Projectile that automatically aims for the next opponent after chaining, so levelling up with it should be a smooth experience. After getting Emperor's Vigilance, Hrimsorrow Gloves, and with Determination, Grace, and Defiance Banner up you can start using Shield Crush. It would make respecing quite a few nodes mandatory (around 25, and 20 are gained from quests), but that's the fastest way to level up.

69 Points Skill Tree
With Polymath allocated, you want to grab all the different Masteries that would be of use. Add to that more Maximum Life and Chaos Damage.

The build can make use of multiple Unique Items, most of them are cheap, and none is overly expensive. It's a good starter build with a lot of room to upgrade in the later stages. The most notable stats to seek will be Maximum Life and Elemental Resistances. Later you will have to include Armour, Evasion, Spell Suppression, and Chaos Resistance. For more Damage, seek mostly global modifiers to Attack Speed, Critical Strike Chance, Critical Damage, and Accuracy Rating. Global stats are these which are not on a Weapon. Lowering the Cost of Skills, Mana Reservation Efficiency, and Attributes like Strength and Intelligence will be quite useful to have too.