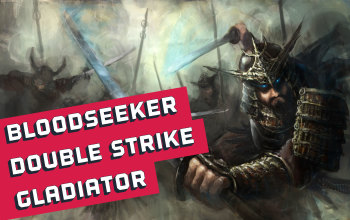 Bloodseeker Unique Claw has one very special property - the Life Leeched from this weapon is instant. You don't have to worry about total Recovery per second from Life Leech or Maximum total Recovery per second from Life Leech because it doesn't apply anymore. These restrictions are usually limiting to the regenerative capabilities of Leeching Builds - that's why the pre-nerf Vaal Pact was so good, it worked in a similar way to the Bloodseeker. With instantaneous Leech, it is possible to survive the aftermath of every hit that doesn't kill you, given that you're capable of landing a hit. The only limiting factor to its regenerative potential - besides its melee nature - is the fact that only 10% of your maximum Life can be recovered on hit, thus Attack Speed is the most important end-game statistic.

Dual Strike has a low base Attack Speed - only 70%, you can switch to other Attack Skills such as Cyclone if you value survivability over damage. If you have high enough Attack Speed, your character will be able to survive Shaper's beam for an extended period of time, but that's not really vital for the overall performance. By attacking with Dual Strike the leech will be instant for both weapons. The protecting layers of this build consist of Gladiator's impressive Block Chance for both - Attacks and Spell Hits, relatively high Armour, Fortify, Steelskin, Phase Acrobatics, and the Arctic Armour from The Perfect Form, Life pool at around 5k, and of course instant leech. With all these features it's really hard to kill this character. Your Damage will come mostly in form of Cold Damage due to easily obtainable nodes on the Skill Tree. For maximum efficiency, it is recommended to swap Melee Splash and Inspiration Support when fighting bosses.

Use Whirling Blades to rapidly dash between packs of enemies to gain Fortify and use Dual Strike to deal with them. Use Enduring Cry to generate Endurance Charges. At maximum - that is three - you will take 10% less Physical Damage, it also heals you. Steelskin is your Guard spell to use whenever it is off cooldown. Ancestral Warchief will boost your damage during challenging fights, while Frostbomb and Frostbite Curse it applies will decimate enemies Cold Resistance.

It's a basic Dual-Wielding Claw-using Elemental-Damage-dealing Gladiator. The best approach is to use two weapons right from the start, later in the game, the character will specialize in Claws. Frost Blades are one of the best options here on lower levels. Initially you can just focus on getting high base Physical DPS on your one-handed weapons of choice, as thanks to Frost Blades you will easily get nearly 100% Damage conversion just from Passives and the Skill Gem. Below you will find the recommended Skill setups and early level equipment.

The build - as the title suggests - is mostly based on a cheap Unique Claw called Bloodseeker. The other Unique Item is Body Armour - The Perfect Form. The rest of the build is pretty simple to compose - you look for Maximum Life, Attack/Cold/Claw/Melee Damage, and Critical Strike mods. Elemental Resistances are important, but over-capped Cold Resistance will grand you more Evasion Rating - converted to Armour with Iron Reflex. The build is overall on the cheap side, but due to the number of useful affixes, it can be upgraded to be really strong, much stronger than the one presented here. Redeemer-influenced items are usually the ones offering you the best choices.

Using this opportunity, we would love to invite you to visit our Path of Exile Marketplace where you can buy cheap PoE Currency in case you can't afford all the items for your character. You can find