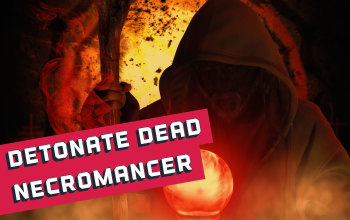 Detonate Deat is a Skill that we've already covered some time ago, it was one of the most popular builds in the game back then but played mostly by Elementalists. This is a Necromancer version, which is nowadays the new meta pick. It works on the same principles - causing Ignite via Corpse Explosion, and converting damage to Chaos via Blackflame. Remember that the damage conversion only applies to the Ignite Damage specifically. It's a Fire Damage over Time caused by a Hit - the corpse's explosion in this case. The downsides of not picking Elementalist are mitigated, but still noticeable, this ascendancy was quite good with ensuring that each Hit would ignite, but it can be easily provided by many passives, skills, and affixes. It has also a direct damage boost to this type of damage. As a Necromancer, you have easy access to the four very impactful Keystones: Essence Glutton, Plaguebringer, Corpse Pact, and Mistress of Sacrifice. These are immensely useful for a corpse-consuming "caster" type of playstyle. Shaper of Flames or Mastermind of Discord (this one is slightly worse) can still be obtained via Forbidden Jewels, these are the only good ones that would really impact your DPS.

It can be played as a Life, Energy Shield, or as is in this case - hybrid Build. Energy Shield can be regenerated via Essence Glutton and Ghost Dance, with some investment into Evasion Rating. It has naturally a lot of resource Regeneration, allowing you to comfortably spam your Skills without worrying about running out of Mana. It can reach around 7k of combined Life and ES, and with Corrupted Soul, it's actually one of the best hybrid builds. You will have a lot of Armour and Maximum Elemental Resistances, up to 85%. It is needed as the build requires you to go into the crowd first, make direct contact, and then make the explosions. It results in creating one of the tankiest builds that there is out of necessity. As for damage - you can deal a lot of it. Scale up your Minon's Life, Ignite, and Chaos Damage. Find Spectres with a lot of Life, and spawn them via Desecrate in large quantities to make sure your Ignites will be at their best. Don't hesitate to create a big pile of corpses before detonating them during boss fights - if the game detects that you caused a more powerful Ignite, it will replace the existing one with it resetting its duration. It's useful, as you will have only a 15% chance of spawning the desirable high-life Spectral Corpse of your choice.

To consistently deal damage, you need an equally consistent source of corpses. Corpsewalker Unique Boots are just what you need as these create corpses with each step, allowing you to just walk into a pack of enemies. If you prefer a ranged playstyle you will have to often use Desecrate. The build performs especially well within maps of high mob density. the corpses created by your enemies are your ammo after all, and you can use them to initiate a chain reaction lasting for some time. The Auras which you're using are Discipline, Determination, Defiance Banner, and Malevolence. Use Spectres with a lot of Life and boost them with Support Gems to be even more sturdy. AS for the Offering we recommend Bone Offering for a high Block Chance. For a Curse use Despair, your movement Skill - Flame Dash, Guard Spell - Molten Shell.

As a necromancer dealing Fire Damage, via corpses explosions we can recommend Raging Spirits with Minion Instability Keystone for a Start. With some investment into Minion Life, you will easily stroll through the acts. After some time you will have to switch to Detonate Dead, and here's an important difference - Detonade Dead is your Spell and you deal the damage now (but Spell Damage won't affect it), not your Minions. You will be able to start investing in your own damage (mostly Burning Damage), which is only based on Minion's Maximum Life. First, ensure that your Ignite Chance is high, then allocate some passives granting you Fire, and Ignite Damage, equip Blackflame, and start sculpting your final form.

67 Points Passive Tree
Get Searing Heat, Acrimony, Holy Fire, and Divine Judgment for Damage. Purity of Flesh and Devotion are used to increase your Maximum Life.

The Unique Items which are mandatory are Corpsewalker and Blackflame. We've also used Aegis Aurora with The Brass Dome and Melding of the Flesh for the impenetrable Elemental Resistances and Armour. Remember that your character must be very resilient. Glorious Vanity shall give you the Corrupted Soul for more Energy Shield. You won't need any Spell Damage - it has no effect on Detonate Dead's Damage. To increase your damage invest in Burning Damage and Chaos Damage alongside Minion's Maximum Life. The "Ignite deals Damage faster" mods are particularly useful. Your Maximum Life and Energy Shield will also be very important, especially the ES sourced from Life, as is the case with Corrupted Soul. Cast Speed is not particularly useful as one enemy can be affected by only one Ignite. The build requires a lot of Strength (for The Brass Dome and Determination) and Dexterity (for Swift Affliction).