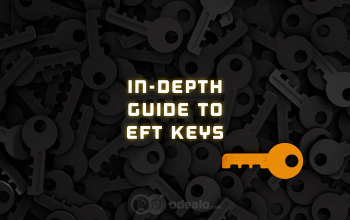 When it comes to locked-off areas in the Escape of Tarkov, there is a general rule that says: If the doors were locked, they must have been worth locking. The best loot on each of the maps is often hidden in areas that can't be accessed without an appropriate Key. This means that you should always have the best EfT keys for an appropriate map, in your secure container, during Raids if you don't want to rely on winning PvP encounters as the only source of loot. With access to the best unlockable loot spots, you will be able to turn even the worst and the most boring raids into lucrative ones. Information is the key (no pun intended) and learning as much as possible about locations of keys and locked areas will enable you to greatly increase the amount of loot you bring from your Raids. It is also worth remembering that using keys is not the only way of profiting from them... finding and selling keys is also a great way of making substantial amounts of money in the Escape from Tarkov.

There are over a hundred Keys in the game and dozens of them unlock places that are worth looting, which complicates things a bit, as it is easy to confuse keys or the areas that they unlock. This is why we have compiled the available information about most of the Tarkov Keys so that you can quickly search for the ones that are of particular interest to you.

How to use our Guide effectively? - To quickly browse through EfT Keys featured in our Guide, press Ctrl+F and search for the Key you are interested in; all Key names were written in the same way as there are named in-game. Every featured Key has a number, that is also present on a corresponding map, marking its spawn location; Right-clicking on a map and pressing "Open Image in New Window" will open the full-sized version of a map.

Keys that can be found in Bags and Pockets of Scavs