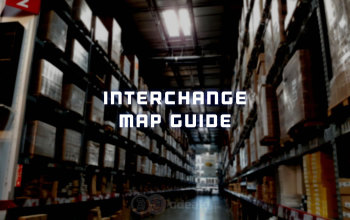 Beginner's Guide to Interchange Map in Escape from Tarkov

Located on the intersection of Tarkov's main transport routes, the Interchange connects the city's port with its industrialized outskirts (featured in-game as the Customs). In the middle of the area, there is the "ULTRA" shopping center filled with dozens of small stores (one can find pretty much anything in them, from provisions and medicaments to jewelry, weapons, and electronics) and three hypermarket-sized ones (Goshan, OLI, and IDEA). The 1st floor of the shopping center is also the territory of the Scav Boss named Killa. He is a heavily armed and armored opponent that poses a serious threat to any, even well-equipped, player. When defeated, he is a source of some of the best and most expensive armors and helmets in the game: Maska 1Sch helmet (Killa) with a face shield and a specially modified version of the 6B13 M assault armor (Killa's version is lighter and does not limit mobility as much, but offers less protection). The abundance of loot and the presence of Killa makes the Interchange very popular among squads of players, which makes the map very dangerous for solo Raiders. Each Raid on the Interchange lasts for 55 minutes and features 9 to 14 players and multiple NPC Scav spawns scattered around the area.

Here is, more or less, what you should expect from a Raid on the Interchange:

There is a lot to explore on the Interchange, from a Power Station, through a giant shopping mall filled with dozens of small stores to the "big three" of the Interchange's shops: Idea, OLI, and Goshan; here are some of the most interesting locations (possible loot included).