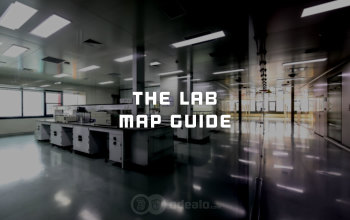 Beginner's Guide to The Lab Map in EFT

Escape from Tarkov
Beginner's Guide to The Lab

The Lab is a top-secret underground laboratory facility built by the Terra Group underneath the city of Tarkov. It does not exist in any official records and its existence surfaced only after the Tarkov conflict escalated and personnel evacuation had to be carried out. Documents and data salvaged by PMC operatives suggest that the lab specialized in biological, biotechnological, physical, chemical, and high-tech areas. Moreover, the state of some of the work areas, their design, and equipment seems to suggest that many of the experiments that were carried out here were forbidden by law (biological agent tests on living subjects (humans), that were most likely carried out in the test room, for example). Lore-wise The Lab is definitely one of the darkest and the most disturbing places in Tarkov as it shows the true face of the Terra Group corporation. Each Raid in the Lab lasts for 45 minutes and features from 6 to 10 players and multiple Scav Raider spawns (some of which can be triggered by players; by activating certain extraction points, pressing buttons, etc.).

This is what you should expect from an average Lab Raid:

There are very many interesting (and sometimes very dangerous) places to explore inside Terra Group's underground laboratory complex located in Tarkov, from abandoned parking lots, through many laboratory areas, offices, and test rooms, to highly-secured arsenal rooms; here are some of the most interesting locations (possible loot included).