VOLUME
DISCOUNTS
UP TO 50%

VIEW ALL OFFERS
Seller: By: datoesa30.0

Rocket League is an online massively multiplayer "soccer" game. It is described as soccer, however, the players control rocket-fueled cars instead of regular human soccer players. It was developed and published by Psyonix, and first released in July 2015 for Windows and PS4 platforms. In Rocket League players assign one to four members to each of the two teams in order to start the match. Players have to use their rocket-fueled cars to hit the ball into the opposing team goal to score a point. The team with more points at the end of the game wins. The game excels in its' simplicity, giving players a lot of fun, and pleasing them with eye-candy graphics. Rocket League's popularity has allowed gaming to be published on 6 (!) different platforms, including PC (Microsoft Windows), Playstation 4, Xbox One, OS X, Linux, and Nintendo Switch. While it remains the very same game, Rocket League players from one of the platforms are not allowed to trade their Rocket League Items with players that play on one of the different systems.  Even though it is still possible on marketplaces and websites like Odealo, where you can simply sell your Items on one platform and buy Rocket League Items on another.

It's also rather surprising for Rocket League, a "sports" game, to have such a well-developed trading system. Most tradeable Goods in Rocket League come from Crates which are opened by Keys which primarily purchased directly from the game developers in the in-game store. There are a bunch of different Crates with predefined rewards that are chosen randomly when you open them. Among types of Items that can be found in Crates are:

Most of the things you can Loot and Trade can come in Painted and/or Certified. So on top of rolling a valuable reward, you have small chances of getting it colored or certified, which can greatly increase its value for collectors. Since the odds of getting such rewards are very low, and the entire Crate system is scheduled for removal, trading is inevitable if you want to get the best Items or complete full sets of specific pieces for your collection. The easiest way to obtain and trade Items in Rocket League is via using Keys. Since players will often purchase them for the sole purpose of making a trade instead of using them to open crates, there are so many of them in circulation. You could treat them as the primary in-game Currency, whereas most Items have their prices defined in Keys themselves. Just like on a regular real-life market, there are also players that solely treat Rocket League as a marketplace, and the online matches are set aside for them. Players can buy low and sell high, or just exploit players that are unaware of the value of the goods in their possession. There are also numerous dangers when it comes to trading in Rocket League, so using a player-friendly and secure Marketplace like Odealo is your best choice.

Trading in Rocket League is done directly from the game's lobby, where you can simply invite a player that is in your Group to trade. After your request is accepted by the other players, a trade window will open which is very intuitive and easy to use. However, there is a limit of 24 Items and 50 Keys that can be traded at once. Slots that you can see on the picture below aren't shared for Keys, as they are counted independently. You need to thoroughly check the other player's offer, as sometimes painted Items may look similar while they are not - for example, it's easy to confuse Grey and Titanium White Items. There are also numerous trades where it's impossible to put all the Items in a single trade, meaning either side will have to trust the other one. This makes trading on external websites like Odealo the safest option, as it's transaction system is similar to Escrow. 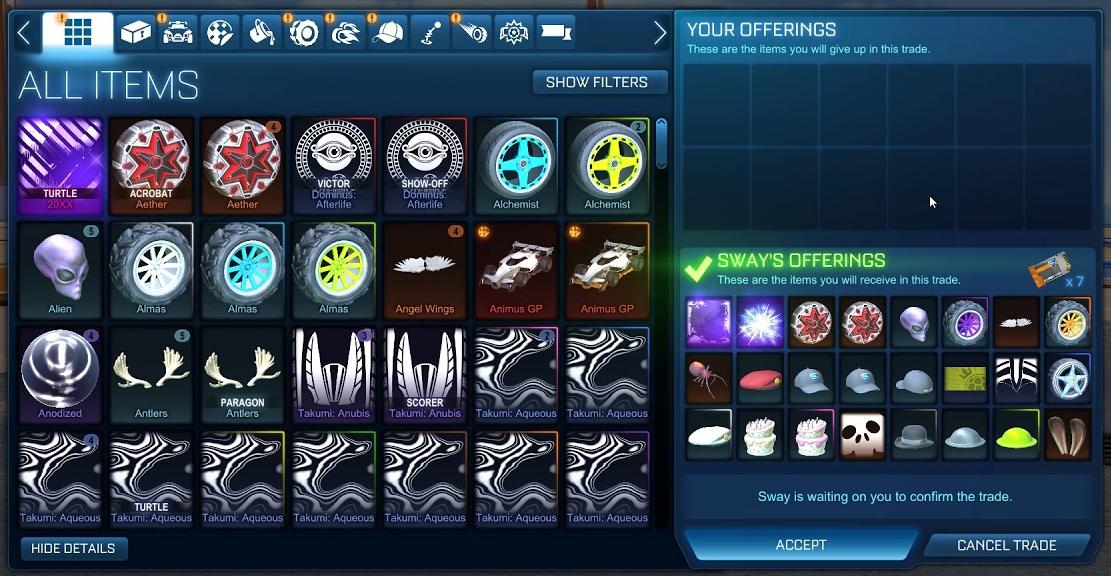 Psyonix does not officially support real money trading, however, it is present almost everywhere, even on the official channels. There are hundreds of thousands of players trading in Rocket League on Facebook groups, Odealo, Reddit, official game forums, various websites and of course privately. This is done on a nearly unseen scale in other more "traditional" MMO games. This might be because buying and selling in Rocket League doesn't affect the game's economy, and it doesn't affect other players' fun as it is only purchased for cosmetic purposes. Odealo is among the most secure Rocket League Markets which allows trading with the use of real money. On Odealo, you can Buy, Sell, and Trade Rocket League Goods with other players, in a completely safe environment. Odealo secures each transaction via its' unique transaction system, which renders over 99% of all trades successful.