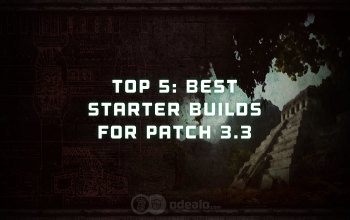 Find out what are the best Starter builds in Patch 3.3 and our Top 5 recommendations for the Incursion Flashback Event

We are already two months into the Incursion League and its' Flashback Event has already been announced. We would like to take this opportunity and present Top 5 Starter builds for this event and Patch 3.3 in general. Two months were more than enough to verify which builds are the best and the most effective at the moment. All of the builds listed, on top of being the best Starter builds, have very good end-game potential. All of them will allow you to farm high tier maps and builds like Fire Elemental Hit Deadeye or Arc Miner Saboteur can even farm end-game Bosses on a very reasonable budget - both being the most cost-effective builds in 3.3.

We don't expect any updates, items or skill changes during this event, so you should feel safe to pick any of our builds and progress fast for the cosmetic rewards.

Fire Elemental Hit Deadeye - Fire Damage Conversion Elemental Hit with Avatar of Fire Passive is currently the most overpowered skill in Path of Exile. It deals an insane amount of Damage with just one required unique - Call of the Brotherhood ring. Uber Atziri kill, on as little as 1-link, has been confirmed with Elemental Hit, which should clearly indicate how powerful it is, even in the hands of casual players.

2.
Arc Miner Saboteur - another amazing build which is suitable for both high tier map farming and end-game Bosses. It is one of those builds which can kill Shaper on 1 Exalted Orb budget, and then again, it requires no specific unique items to allow you farming efficiently.

3.
Vaal Fireball Elementalist - another interesting build for Patch 3.3. Elementalist became one of the most popular classes because of the recent changes to Ascendancy Passives and Ignite mechanic. This build provides extremely enjoyable playstyle and is one of the best classic spell-caster type builds.

Crit. Earthquake Juggernaut - the only Melee build on the list. Patch 3.3 clearly diminished the position of the Melee builds, but with the very high popularity of the Juggernaut class, we have decided to include at least one Melee Juggernaut on this list. This build requires only one unique item which should be easily obtainable, making it a perfect choice for a League Starter build

If you got any suggestions for other powerful Starter builds for the Event please let us know in the comments below. And see you soon in Wraeclast!