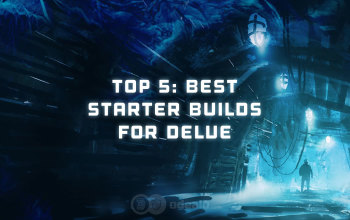 Top 5: Best Starter builds for the Delve League and Patch 3.4

Find out what are the best Starter builds for Patch 3.4 and the upcoming Delve League

Delve League that launches together with Patch 3.4, introduces a completely new gameplay, altering the end-game entirely as well. In Delve League, players will be able to ascend an Azurite Mine which will indefinitely increase the difficulty level, by far exceeding all the currently available content. You will be exploring the mine alongside a Voltaxic Sulphite-fueled Crawler, which will light you the way and allow you to progress. If you die in Delve, you will fail it, and you will be forced to repeat it, making it a necessity to play a tough build that will be able to face all the challenging and completely random encounters. Below you will find out Top 5 Best Starter builds for the Delve League. All of them provide solid defensive mechanics, high DPS, require near to none specific unique items and scale well into end-game, allowing you to ascend the Mine.

1.
Arc Miner Saboteur - even with the nerfs to Minefield Support Gem and Shimmeron Dagger in Patch 3.4, in our opinion, Arc Miner Saboteur will still remain one of the most popular builds out there. With the Delve mechanic, which makes it impossible to reroll unwanted Delve mods while progressing, we believe that Miner's gameplay mechanic, which provides immunity to Damage Reflection will be invaluable

Quad Frostbolt Totem Hierophant - Totem builds will be again extremely popular in 3.4. Similar to Mines and Traps, Totems provide immunity to Damage Reflection which will let you progress much faster than most of the regular budget-friendly builds. On top of that, our Hybrid Life and Energy Shield build, provides very good defenses at a very low cost and with no expensive gear requirements

3.
Dominating Blow Herald of Purity Guardian - with the vast changes to Minion Passive skills and Guardian Ascendancy Passives, we believe this is a build to in Patch 3.4. Guardian will benefit from both Attack Speed and Minion Damage Passives on the Skill Tree, granting him very high DPS, insane Minion Damage bonuses, and defenses. It's yet to be confirmed, but it seems Minions will not die while covered by the darkness in Delve, making them perfect choice for the Delve League. Also, the build requires no expensive unique items

Blade Flurry Gladiator - Gladiator is known for rock-solid, block-based defenses and good DPS that can be easily achieved without spending a fortune. With the Delve progression mechanics, the Blood Explosions' DPS will scale greatly as you progress, and Block has always been a very reliable defensive layer

Crit. Earthquake Juggernaut -  since you can't die in Delve to progress further, we did have to introduce a Juggernaut build as well. Juggernaut is one of the most popular, defensive melee classes in Path of Exile. High Physical Damage mitigation, Endurance Charges, high Life are what make up for one of the best Tanks in Path of Exile. Not to mention the changes to Earthquake Skill, which makes leveling up this character much easier in 3.4

If you got any suggestions for other powerful Starter builds for the Delve League please let us know in the comments below. And see you soon in Wraeclast!