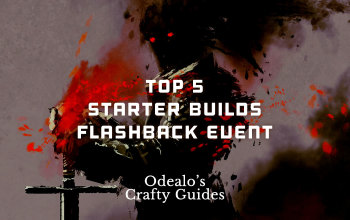 Our List of Top 5 Starter builds for the Flashback Event which will run from May 5th till May 29th, and provide amazing cosmetic rewards

The Flashback event starts on May 5th and will last until May 29th. This is quite a long period of time, so instead of presenting the best builds for the competitive players, we have decided to create a list of the best starter builds. Using any of the builds below, you should be easily able to level up your character and earn the amazing cosmetic rewards within a given period of time.

During the Flashback Event, each zone will simultaneously have three different mods from the Bestiary and previous Leagues including Abyss, Ambush, Anarchy, Beyond, Bloodlines, Breach, Harbinger, Invasion, Nemesis, Perandus, and Torment. It's an exciting idea and might give some players the chance to experience Leagues, they possibly never had a chance to play. Also, the rewards are simply amazing. You will be awarded a random pair of Cosmetic Wings for reaching level 85 (out of Raven, Arctic, and Infernal wings available), and a random Armour set for reaching level 95 (out of Bear, Lunaris, and Demon King Armour packs).

Since we still have Patch 3.2, and there are no class-balancing changes or new items, the builds more or less remain the same compared to Bestiary League. However, since monsters get 3 additional mods, and become stronger, defenses may play a more important role in getting to higher levels within a limited amount of time. This caused, our suggested builds to provide higher defenses, while at the same time sustaining reasonable damage

Ahn's Might Cleave Juggernaut - Juggernaut is one of the most popular classes in Path of Exile's Patch 3.2. It provides very good defenses, thanks to the high Life pool, Endurance Charges, and Armour. This build, even on a moderately low budget, is capable of clearing all the Path of Exile's content

Blade Flurry Gladiator - Gladiator class provides the classical Sword & Board type of gameplay. It's one of the few builds that require no specific unique items, provide good defenses thanks to the Block mechanic, and can sustain very high DPS.

Blade Vortex Herald Elementalist - this build is extremely powerful, and again, requires no expensive uniques. On top of terrific DPS, it provides very good defenses, with very high Life pool and Freeze mechanic. And as they say, the best defense is a good offense

We hope you enjoy the Flashback Even with one of our builds and earn your desired rewards. If you have any suggestions about any of the above builds, let us know in the comments below.