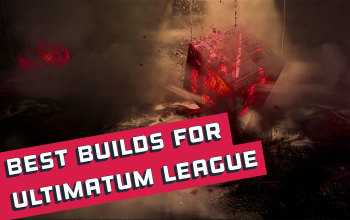 The Best Starter Builds for the Ultimatum League and Patch 3.14

Our list of the best 5 Starter Builds for the upcoming Ultimatum League and Patch 3.14

The Best Starter Builds for the Ultimatum League
Patch 3.14

Patch 3.14 will launch soon and alongside it, the Ultimatum League is getting introduced to all the players. The core mechanics of the Ultimatum League appear to be very similar to that you may familiar with from the previous Ritual League. You basically find an object in the area and spawn waves of enemies in its' close proximity. You can continuously spawn extra waves, gradually increasing the difficulty and rewards from such encounters. As the radius of such an arena is rather small, you surely will prefer characters that can take some hits before going down, as monsters can spawn right next to you. Also, having good AoE will help you deal with the waves much faster, in most cases, a character with good AoE should be able to hit most of the monsters simultaneously. However, apparently, the best part of the 3.14 update is not exactly the League's mechanics, but other global changes to the game, just like with the previous Echoes of the Atlas expansion.

With the new Patch, plenty of new interesting Physical abilities get introduced to the game with new Physical DoT effects. Also, there are big changes to Life/Mana reservation mechanics, and finally, you will be able to scale your DPS by increasing your Life and Life recovery - a feast previously available only to selected few classes oriented around Maximum Mana. We are truly looking forward to how this will affect Melee builds in particular, as they were always known for relying on Life and Life Leech. There are also big changes to the Berserker class which have been reworked completely. He received a new defensive mechanism - Defiance, and as Class, apparently it may be viable for Physical Spell Caster builds, so it may also be an interesting class to play in 3.14 (possibly also with Reap?). Other than that we are looking at a lof of minor/numeric changes, some new Unique Items, and thorough changes to Vaal Skill Gems as well.

PLEASE NOTE: The following list is based on our team's overall experience from previous Patches and currently available data about Patch 3.14 and the upcoming Ultimatum League. Even without all the detailed information and actual testing in practice, the list should be quite accurate as most of the skills receive just numeric changes. So whatever was best in 3.13 most likely will still stay extremely powerful and a viable build choice for the new content

If you have any suggestions about other interesting Builds and/or Starter Builds for the Ultimatum League we would love to hear your feedback! The patch is yet to be launched so we are not exactly sure yet what projects should we pursue first. Furthermore, we always appreciate constructive criticism as it helps us improve our content!