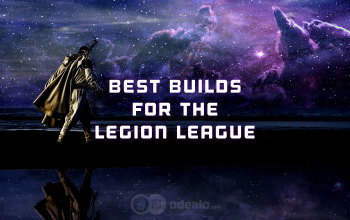 Best 3.7 Builds and Starter Builds for the Legion League

Check out our recommended builds for the Legion League

The Best Builds for the Legion League and Patch 3.7
including Top 5 Starter builds

Patch 3.7 brings major rebalancing to melee playstyle. Majority of Melee Skills gets significantly buffed, new Melee Support Gems are introduced, typical Melee classes including Berserker, Gladiator, Slayer, Champion, and Chieftain are back to glory. This causes the majority of builds that appear on our list to be based on those classes. Below we are presenting what we expect to be the 5 Best(or most interesting) Builds to play in the upcoming Legion League. We are adding links to all the builds that are based on the builds we have made previously, which will be updated sometime around the launch - rest assured, we won't add any links here that would lead to completely outdated stuff that could lead you excessive rerolling later on.

PLEASE NOTE: This list is based on the Patch notes that were introduced today (June 5) and our predictions. We will verify it over the course of the next few weeks, and all builds will be thoroughly polished when new Items and Legion Jewels get fully revealed.

Below you will find our recommended Starter builds for the upcoming League. We have decided to introduce new interesting builds in this section. Most of the Starter builds that we have listed in previous Leagues are still solid and fully viable, but we expect that seeing something new will be much more interesting for you.

The Best Starter builds for the Legion League and Patch 3.7

We will appreciate suggestions and feedback that could help us improve our list and/or the builds themselves. If you would like to share your thoughts about our work, let us know in the comments below.