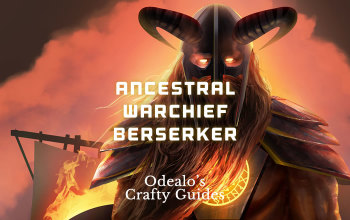 Ancestral Warchief Berserker is the strongest Melee/Physical Totem build in Path of Exile. Also, it's a great low-budget League Starter

Ancestral Warchief is one of the most robust budget-friendly Melee/Physical builds in Path of Exile. It can be easily played as a very efficient League starter build and depending on your final budget; this build will be surely able to clear all of the Path of Exile's end-game content. Utilizing Rage as a Berserker grants the highest possible Attack Damage bonuses, however, it's a bit awkward in this build. We generate Rage with Cyclone, which deals 0 damage; it's used as a utility skill which grants Infusion buff, Life on Hit and generates Rage.

Ancestral Warchief is a Totem build. It, however, uses Melee Physical attacks instead of Spells. In this build, we go with the Facebreaker Gloves which greatly increases Melee Physical Damage. With multiple ways for the Berserker to add flat Physical Damage, this build provides insane DPS on higher Rage levels. You are supposed to generate Rage with Cyclone, which has great proc coefficiency, and also it grants Infusion buff and grants high Life gained on Hit. You also have to periodically cast War Cry for extra damage bonuses, and it can act as an instant Life Recovery Flask. Also, the new Duration Spell; Berserk is used to give you insane burst DPS against Bosses. Just make sure you use it when your Rage is close to the maximum for the best effect.

Leveling with Facebreaker gloves is one of the easiest ways to level up a character. If you can (or find) items with added Physical Damage, you will be one-shotting everything. Some of the items including the Facebreaker Gloves and Meginord's Belt will be used by you when reaching the end-game content anyway, so you should be fine investing in those early on.

During your first levels, use any of the skills available to Marauder - Molten Strike/Heavy Strike/Cleave - it doesn't matter as the content is easy. Get to level 14 and equip your Facebreaker gloves. From this point onward, you can use Shield Charge as your main Attack until you get the Ancestral Warchief at level 28.

Kill all the Bandits for two additional Passive Points

Ancestral Totem Build can be built either in a very budget-friendly variation, for smooth mapping, or extremely strong Uber/Shaper farmer. We are presenting suggested item options for the budget-friendly version using Bringer of Rain Helmet for very cheap 7-links. If you would like to see what items should be used for the end-game content let us know in the comments below!

Also, if you are looking for a place to buy cheap PoE Currency, you can head over to our market section via links on top of this page.

The recommended gear in this guide will:

We are looking forward to your feedback and suggestions for our next build.