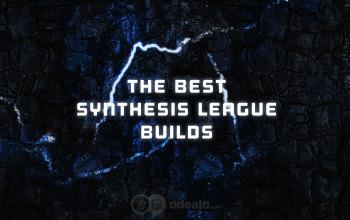 Check out our build recommendations for the upcoming Synthesis League

The Best Builds for the Synthesis League and Patch 3.6
*plus new interesting builds included!

Patch 3.6 is well underway and we would like to present our list of the best PoE builds for the Synthesis League. If you are tracking the news on Path of Exile's official website, you should know that the game will receive some serious balancing changes. Majority of the previously unpopular spells will receive significant buffs to catch up with the rest. This opens up a lot of possibilities for new potent builds, mainly focused around hand-casted spells. We are presenting the best 5 builds for the Synthesis League which are great as a starter builds, and offer a very smooth transition into mapping and late game.

PLEASE NOTE: This is our list of the builds we are currently working on. All of them will be optimized/updated for Patch 3.6 before the Patch or within the first 24 hours of the Synthesis League launch

Winter Orb Elementalist - Winter Orb was one of the most over-powered spells in 3.5 which lead to reducing its damage by approximately 10% in 3.6. However, all the changes to self-casting and new powerful Passives that correlate with channeled spells will have this nerf nullified completely. In our opinion, Winter Orb still will be the most popular (and powerful) Spell in Synthesis League

Essence Drain Occultist - one of the most powerful Chaos builds in Path of Exile. With the recent buffs to self-casting and Essence Drain itself, this builds just got better. Our recommended ED build is based on Low-Life and Energy Shield making it a very solid end-game pick

3.
The Ultimate Molten Strike Gladiator - with no changes to melee skills in Patch 3.6, Molten Strike still remains the best melee attack in the game. If you are planning on playing a melee character in 3.6 this is the way to go. With the changes to curse effectiveness against end-game Bosses, this build is even more convenient to play in 3.6 as you will be able to efficiently gain Life and Mana on hits against Elder, Guardians, and Shaper.

Soulrend/Bane CI Trickster - potent map farming build based on the newly added Soulrend spell. With the core damage and defenses coming from Skill Gems, Passives, and Trickster's Ascendancy class, this is a great League Starter build. When compared to the Occultist class, Trickster provides much more utility in terms of clear speed and defenses. With the reworked Ascendancy Passives, this build provides rock-solid defenses and insane Energy Shield recovery, which will help you push this build to end-game Bossing as well

Ice Trap Saboteur - Trapper character was a very solid pick pre 3.6 so by nearly doubling Ice Trap's damage, GGG made this build a very interesting choice for the Synthesis League. Time will tell whether it's more powerful than Glacial Cascade in terms of raw power and clearing end-game content, but trying something completely new is definitely worth trying out.

Other interesting builds for Patch 3.6 that are worth trying out

Shock Nova Elementalist - another powerful self-cast build based on the Elementalist Ascendancy class. Shock Nova is one of the beneficiaries of the current Patch, with extremely high damage increase. This build provides great clear-speed and damage. After 3.6, we hope to verify that this build is completely viable for all the end-game contents without excessive expenditure needed

Cold Snap/Vortex CI Occultist  - one of the most powerful builds in the game previously. With merely a few % damage reduction on Vortex spell, and tremendous buffs to Energy Shield, and the addition of Energy Shield Leech, this is an exceptionally powerful pick for Synthesis League and Patch 3.6

3.
Freezing Spark Inquisitor - Spark Templars were once the most popular farming classes in Path of Exile. With the current buffs to both Spark Spell Gem (damage and damage effectiveness buffs) and increased single-target DPS by allowing it to chain to the same target, this is one of the best low and mid-tier map farming builds in the game

Toxic Rain Pathfinder  - this build has been untouched in Patch 3.6 and it is still one of the best Ranger/Bow builds in the game based on the Toxic Rain Attack skill

DBZ Divine Ire Inquisitor - very enjoyable build based on the new powerful channelled Spell - Divine Ire. The entire build bears resemblance to Dragon Ball series and charging up the Kamehameha Wave. It has insane burst DPS and allows you to one-shot most of the enemies with a fully charged Blast

We will appreciate suggestions and feedback that could help us improve our list and/or the builds themselves. If you would like to share your thoughts about our work, let us know in the comments below.