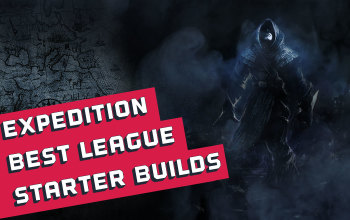 The Best Starter Builds for Patch 3.15 and Expedition League

List of the 5 most cost-effective builds in Patch 3.15 that are the best choices to start your adventure in Expedition League

The Best Starter Builds for Expedition League
and Patch 3.15

The Expedition League is launching soon so we want to show you some of the best starter builds. The changes brought by the new league are one of the biggest the game has seen yet - 19 new Gems have been added, which we will try to cover in later build guides. Flasks now work a bit differently, to prevent being under the constant influence of them. It now takes longer to refill a Flask, but they can be modified with new special Orbs - Flasks can be automatically triggered when certain conditions are met, or attain new powerful effects at the cost of being unable to gain charges during their effect. Overall, this league will be more challenging - to battle the power creep which presence is more and more visible as the game has been developing, the pure-damage Support Skill Gems such as Melee Physical Damage Support will be nerfed. Automatically triggered Skills will now cost Mana, movement Skills will be probably nerfed too, and enemies in the first acts are going to be more powerful. It means that all the builds from the past will perform worse when compared to the 3.15 expansion, and much of them will have to change completely.

The brand new defensive layer has been introduced - Ward. Ward is a numeric value representing the amount of damage that will be deduced when you're hit, after receiving a hit your whole Ward is depleted, and after five seconds it's instantly restored. If you're constantly receiving Hits, it's better to invest in faster Ward restoration or don't pay any attention to it at all, but if you have a high chance to Evade or Dodge a Hit, it's better to increase your Ward. It has a huge potential to give you an advantage against bosses that have a low attack or cast speed, such as the Guardian of the Minotaur or Hydra, Sirus, most Conquerors, or map bosses that you fight one on one. Note that if you Block or Avoid Damage - you have had already been hit, and your Ward will be depleted anyway. When you're about to get hit, the first to roll is your chance to Evade, then Dodge, after both fail you receive a Hit that can be Blocked, and if that fail - Avoided. Ward modifiers will be commonly found as modifiers on Rare items or the new Uniques.

\The new League Mechanics is quite an interesting one - you travel to an isolated location where you can choose your own level of difficulty by placing the explosives at the locations where they'd wake up the enemies buried underneath the ground. You can choose to summon a lot of enemies which you will have to defeat, or if you don't feel like fighting - go for the smaller rewards. You can later trade the league-specific currency with the new NPCs for some gear and currency by haggling with them. The locations you can travel to come in a form of an item similar to a map, there can be modifiers increasing monsters' effectiveness and decreasing your defenses, you can also encounter new bosses here. It's in some ways similar to the Ritual League mechanics - you fight monsters to gain currency that can be later traded for times. This time it's much more complex with few tweaks and additions.

If you have any suggestions about other interesting Builds and/or Starter Builds for the Expedition League we would love to hear your feedback! The patch introduces a lot of new Active Skill Gems that will take some time before we can test them all thoroughly, so if you have any suggestions please let us know in the comments below! Obviously, we will be updating all our Guides over the course of the current League