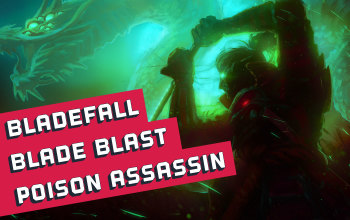 Bladefall skill combined with Blade Blast is a popular choice for Assassins. Both of these Spells are dealing Physical Damage, but the main source of damage will come from Blade Blast, Bladefall is used just so there can be blades to be blasted. With Bladefall your main objective is to cast as many blades as possible - that's why the usual Supporting gems for it are Unleash and Spell Cascade. Assasin Ascendancy offers great synergy with Poisons - it will be yet another source of DPS in this build. Ungil's Harmony Unique Amulet and Coralito's Signature Unique Flask have an interesting effect - your Critical Strikes will deal no extra damage, but both of these items grant something in return. The Amulet mostly increases your Critical Strike Chance by a lot, and the Flask increases your Poison effectiveness and grants you Perfect Agony during its effect - a Keysone that makes the Poison applied from Critical Strikes include the Damage increases from Critical Strike Multiplier at 50% of its value. Toxic Delivery Ascendany Keystone will increase the Poison Damage from Critical Strikes by another 50%. What it means is that despite not dealing extra damage from Critical Strikes, your Critical Strikes will increase your DPS anyway, not with Hits but with Poison.

The build is Life-based with a lot of Evasion Rating and Chance to Dodge Hits. Energy Shield and Armour are almost non-existent. Ascendancy offers you immunity to Reflected Damage given these are Critical Strikes and Mistwalker - a Keystone that increases the Elusive effect, and you take no extra damage from Critical Strikes. Noxious Strike grants almost instant Life Regeneration. Withering Step grants more Elusive effectiveness and Phasing, and applies few Stacks of Withered, increasing Chaos Damage enemies take by 6% per stack. The Damage from Blade Blast can stack, that's why it is important to get a reasonable amount of increased AoE. It is a common practice to own a Helmet with a mod granting Concentrated effect for socketed Gems and put Bladefall there - the Area on with your blades fall will be smaller, but the number of blades will stay the same so it's actually great addition. Poison is the main damage source when fighting bosses, and with a lot of Blades concentrated in a small area it's really effective.

You cast Bladefall and then instantly after - Blade Blast, the Blades explode dealing a massive amount of damage and then you activate Plague Bearer. With Plague Bearer this build plays really smooth, you can stack the maximum amount of charges on it within seconds, and then kill small opponents nearby just like with Righteous Fire. To slain more vital opponents, just use hit them with blades again and again until they're dead. Smoking Mine is going the be used as a movement Skill. You can put Wither Spell on Totems for boss fights, they will quickly reach maximum stacks of Withered debuff making them take 90% more Chaos Damage. Use the Withering step to instantly refresh your Elusiveness with increased effect and apply some Withered stacks - use it mostly defensively.

Leveling process can be quickly done with any Poison Skill. It has to be a Skill that Hits, but not necessarily a Spell, it can be an Attack. What we recommend is Cobra Lash, Caustic Arrow, or Toxic Rain, you can use these until you're able to cast Bladefall with its three mandatory Support Gems - Unleash, Spell Cascade, and Concentrated Effect, you won't be able to use it until level 38. Leveling is pretty straightforward, switch to your final setup as soon as you can, or as soon as your damage will slow you down.

71 Points Skill Tree
take the whole Cluster where Atrophy and Force Shaper is and head straight for Wind Dancer Keystone, take Life nodes you come across

Below you will find all the recommended and required gear for this build. The most important stats to increase your Damage are Poison Damage, Chaos Damage, Critical Strike Chance, and Damage over Time. For defense just look For Maximum Life and cap your Elemental Resistances by any means necessary. The build is really cheap and it shares a lot of useful mods with some of the most popular builds - Toxic Rain or Essence Drain/Blight, so gearing up might be even cheaper due to the abundance of good items in the market. You will need around 100 Strenght and 200 Intelligence, it's not hard to get but requires some effort.