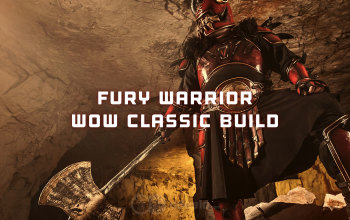 You can find all our Pocket Guides for other World of Warcraft classes right here: Best WoW Classic Builds

If you have just started your Warrior Character, you may want to check out our Warrior leveling Guide first

While leveling a Warrior to 60 is a tough challenge, players who manage to do it are rewarded with a Class that has the most potential in the game (both for Tanking and Damage Dealing). For the most part, Fury Warriors top DPS meters in Classic and scale very well with Gear, which means that they get even better as the game progresses through Raid Tiers. However, the fact that the Class does well in the End-Game is wide known, which results in an abundance of Warriors and potentially a substantial difficulty in finding a strong Raiding Guild. Another side effect of Warrior's popularity and clearly visible strength is the fact that solid gear is hard to get, as competition for it is always fierce (there will be multiple Fury Warriors in every Raid and all of them will want exact same items). If you want to main a Fury Warrior, you have to be one of the best Fury Warriors out there, otherwise, you will drown in a sea of other Rage users.

Note: Here, we will point you only towards the best PvE DPS Warrior Race. If you'd like to know more about other race picks, please check our WoW Classic Beginners Guide, where we dive deep into all available Warrior's race choices for both factions.

There is only one profession that makes a real impact in Raids and it is Engineering (Alchemy is also a decent option, but you can buy Flasks, Elixirs, and Potions from other players, which makes it much less impactful). It gives you access to powerful explosives that increase your AoE and Single-Target DPS. On top of that, it lets you create and use Gnomish Battle Chicken Trinket that summons a Guardian Chicken that fights at your side and has a chance on hit to cast a "Battle Squawk" which boosts Melee attack speed of all Party members by 5%, making it a must-have in every competitive group. The fact that Engineering is also considered the best PvP profession is an added benefit to its power in PvE environment.

There are two paths to choose - the standard Dual Wield build that provides the highest sustained DPS and an alternative Two-Handed build that can be used if you happen upon a solid Two-Handed Weapon that is clearly better than your current One Handers. Moreover, the Two-Handed build is a good choice at the start, because of lower Hit requirements (with a Two-Handed weapon, you ignore dual-wielding Hit chance penalty), especially on Horde's side thanks to the Windfury Totem.

In order to maximize your DPS, you should aim to assemble the best possible Gear. This applies to both Pre-Raid and each of the Raid Tiers/Phases. Also, remember that it is the armament that gives the highest DPS boost, so you should start by getting the best warrior weapons available. Below, we present you the BiS (Bst-in-slot) list for all equipment slots.

Note1: The list will be updated with new items concurrently with the introduction of new Raids/Phases, so remember to visit this page after new Raid opens for an update on what current best Warrior items in each lot are.

In Classic, Warriors don't have a strict rotation and use a priority list instead. This means that they don't have a build-up phase and can swap Targets quickly without losing DPS.