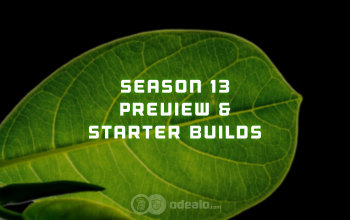 Season 13 is starting soon. Find out what are the sets awarded to each class in Haedrig Gifts, and what are the best builds in S13

PTR is already underway for Season 13. Sadly there are no patch notes yet, and no new content is expected in Season 13. This is good for two main reasons, which are:

Season 13 will launch on Friday, February 23 at:

Since there will be most likely no new content we have decided to focus on Starter Sets for Season 13.  This refers to sets gifted to players after completing Chapters II, III and IV of Season Journey. We will answer the following questions:

Since there are no patch notes and possibly no class-balancing will take place in Season 13, we expect that Power Tiers will not change for any of the classes either. Luckily all of the Starter sets in Season 13 are very powerful, with as many as three classes have their strongest set available in Haedrig Gifts. These are Wizard, Monk, and Demon Hunter. Other classes also look very promising, with sets that provide a good foundation for powerful builds.

When creating your first seasonal character and completing Chapters II, III and IV on your Seasonal Journey, you will be awarded Haedrig's Gifts. You can get a total of 3 Haedrig's Gifts, and each Gift will contain two pieces of one of the sets for your character class. The set is predefined and changes every season. Also, you can get it only once per season - for the first character that completes the selected Journey Chapters.

Haedrig's Gifts are awarded for completing:

Season Journey consists of 9 Chapters. After completing each Chapter (except for the first one) players receive Seasonal rewards. The rewards can be collected only once per Season. It is still unclear which Bosses have to be slain for specific Chapters, but you will have to kill most of them,

If you have any tips on how to get a good start in Season 13, feel free to share them in the comments below.