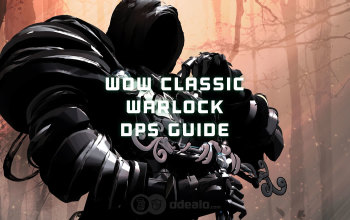 In-depth guide on becoming a DPS Warlock in WoW Classic

If you have just started leveling your Warlock, you may want to check out our Warlock leveling Guide first

In WoW lore, Warlocks derive pleasure from cursing and hurting their enemies. They are masters of the Shadow and Destructive magic and can bind powerful demons to their will. In WoW Classic, they are versatile Damage Dealers who suffer a bit from limited debuff slots. Despite that limitation, they are still very popular as a Class thanks to their grim flavor, great utility spells, and the ability to humiliate inexperienced enemies in PvP. Their second main limitation - the fact that pets take 100% damage from AoE abilities, is countered by the most popular Warlock DPS build, that sacrifices a pet in exchange for increased Shadow Damage.

When in a Raid or a Dungeon group, Warlocks provide Soulstones that allow an in-Combat resurrection of a pre-designated party member, Healthstones that work like Health Potions, and the Ritual of Summoning that makes assembling a Raid much, much easier. Contrary to what their lore background might suggest, Warlocks are best friends of any Player that likes to run through any kind of group content. They also provide various powerful debuffs that come in handy in a multitude of situations. Moreover, they don't have any Sustain problems, thanks to their Life Tap ability which allows them to perform at the highest level even during long encounters.

Note: Here, we will point you only towards the best PvE DPS Warlock Race. If you'd like to know more about other race picks, please check our WoW Classic Beginners Guide, where we dive deep into all available Mage's race choices for both factions.

There are two professions that make a real impact in Raids and they are Engineering and Tailoring (Alchemy is also a decent option, but you can buy Flasks, Elixirs, and Potions from other players, which makes it much less impactful). Engineering gives you access to powerful explosives that increase your AoE and Single-Target DPS. Moreover, Engi gadgets come in handy in many back-to-the-wall situations. The fact that Engineering is also considered the best PvP profession is an added benefit to its power in PvE environment. Tailoring, a seemingly mediocre PvE profession, gives you access to a powerful Bind on Pickup Robe - Robe of the Void which is a pre-Raid BiS that is great during phase Phase 1 and stays competitive in Phase 2. Getting it will definitely raise the power level of your character during the first few Phases of Classic.

At the start, you should pick Mining to supplement your Engineering Skill, you should also stock up on Cloths instead of vendoring/selling them. After you max out Engi, you should switch Mining to Tailo, as it can be easily (and rather cheaply) leveled without a supporting profession.

There are two competitive Warlock DPS Builds to choose from if you are DPS-oriented:

Note1: The list will be updated with new items concurrently with the introduction of new Raids/Phases, so remember to visit this page after a new Raid opens for an update on what current best Warlock items in each lot are.

In Classic, Warlock follows more of a priority list than a strict rotation. This means that if you have multiple spells available for casting, you should always choose the one that is higher on the list.

Note2: You might not be allowed to cast your DoTs (Corruption/Curse of Agony) and/or tasked with maintaining a specific Curse on a Target.