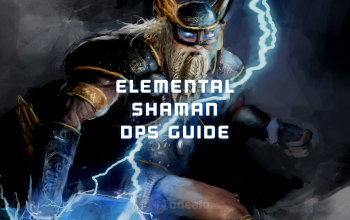 If you have just started leveling your Shaman, you may want to check out our Shaman leveling Guide first

As a hybrid class, Shamans combine the traits of DPSers, Healers and, to a lesser extent, Tanks. Thanks to this, they are among the most universal characters in WoW Classic. Elemental Shamans take full advantage of what their Class provides which makes them arguably the best Support DPS specialization in the game. For one, they can equip shields and mail, leather or cloth armor, which makes them flexible when it comes to equipment. On top of that, they can deploy a Class-specific themed group of ground-based buffs called Totems. With these, they can provide various powerful damage-increasing buffs (Windfury Totem, Grace of Air Totem, and Strength of Earth Totem), assist their group by providing very strong utility (Poison Cleansing Totem, Tremor Totem),  or help with group's sustain and longevity (Stoneskin Totem, Windwall Totem, Mana Spring Totem). Moreover, they have: the best interrupt in the game in the form of the Earth Shock (its cooldown is just 6 seconds which is the shortest of all interrupts), an ability to Purge Targets which removes magic effects from them, and the Frost Shock which is infamous for being able to perma-slow a Target (Frost Shock's slow effect is longer than its cooldown). On top of that, they have powerful PvE DPS-oriented tools, like Elemental Mastery and Elemental Focus, that let them deal sustained Damage and burst down their Targets quickly if needed.

Thanks to the utility that they provide, every group will benefit from having an Elemental Shaman in it. This fact combined with Shaman's versatility makes Elementals an inherent part of almost every Horde Raid.

Note: Here, we will point you only towards the best PvE Elemental Shaman Race. If you'd like to know more about other race picks, please check our WoW Classic Beginners Guide, where we dive deep into all available Shaman races.

There is only one profession that makes a real impact in Raids and it is Engineering. It gives you access to powerful explosives that increase your AoE and Single-Target DPS. Thrown explosives have a decent range, so you can use them effectively while sticking with Ranged groups of your Raid and providing them with Totem buffs. The fact that Engineering is also considered the best PvP profession is an added benefit to its power in the PvE environment. Alchemy is the second interesting option. It will let you brew a lot of much-needed Consumables and when paired with Herbalism, allow you to make a nice profit on the Auction House (this is a less competitive option as most of the Consumables that come from Alchemy can be bought from other players rather cheaply).

At the start, you should pick Mining to supplement your Engineering Skill, you can always switch it to another profession of your liking later on. If you've decided to go for Alchemy, Herbalism is the natural second profession pick - we recommend you stick with it for as long as you actively use Alchemy.

There are two distinct paths Elemental Shaman can take when it comes to Talent Builds:

Note: The list will be updated with new items concurrently with the introduction of new Raids/Phases, so remember to visit this page after a new Raid opens for an update on what current best Elemental Shaman items in each slot are.

Proper enchants and consumables will greatly increase your Damage output and Sustain. While getting enchants is a one-time-deal, farming consumables might be a real chore, but it is worth it as numbers clearly show.

As a Support Class, Elemental Shaman follows a priority list instead of a standard Rotation. Spells that allow Shaman to deal with emergencies and encounter-specific mechanics are higher on the list as resolving them should be his top priority.

Note: To fight with Sustain problems, you will be often forced to downrank* your spells. Moreover, if you are using a spell only for its effect (Earth Shock as an interrupt, for example), you should always cast its Rank 1.

Downranking* - method of conserving Mana by using lower ranks of spells. Using this method is sometimes necessary to not run out of mana before combat ends. You should calculate how much mana different Ranks of your spells consume per minute (when used in rotation) and use them accordingly in order to preserve resources (the longer the fight, the lower the Rank of used Spells).

Please use the following Priority List in Single-Target engagements: