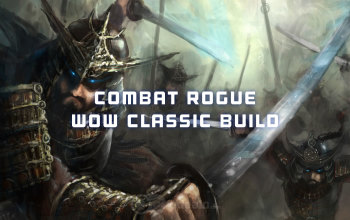 If you have just started leveling your Rogue, you may want to check out our Rogue leveling Guide first

Combat Rogue is one of the best DPS Classes in Classic WoW, losing only to Warrior when it comes to pure numbers. His Energy mechanic (in Classic, Rogue gains 20 Energy every 2 seconds) allows him to keep up his DPS even in the longest of encounters, making Sustain not an issue at all. However, in very long fights, Rogue might be forced to reapply his poisons as they have limited charges. This can lead to a slight DPS loss, but it is negligible when compared to a loss caused by running out of resources. He has access to two solid threat-management tools in a form of Vanish and Feint, so he is able to deal steady damage without any real risk of gaining Bosse's unwanted attention (for as long as he pays attention to his Threat meter, of course). Unlike some other Classes/Specs, Combat Rogue performs at the top level throughout all the content Phases, which makes him a solid DPS choice for any Raid Tier. His Utility, while not the best in Raids, can prove to be irreplaceable in smaller groups or in certain Raid encounters, like suppression room in Blackwing Lair. The only real drawback of Combat Rogue is his popularity. Finding a spot in a decent Raiding guild might be a slight problem, but it can be overcome with a little bit of hard work and dedication because solid and dedicated Raiders are always in high demand.

Note: Here, we will point you only towards the best PvE DPS Rogue Race. If you'd like to know more about other race picks, please check our WoW Classic Beginners Guide, where we dive deep into all available Rogue's race choices for both factions.

There is only one profession that makes a real impact in Raids and it is Engineering (Alchemy is also a decent option, but you can buy Flasks, Elixirs, and Potions from other players, which makes it much less impactful). It gives you access to powerful explosives that increase your AoE and Single-Target DPS. On top of that, it lets you create and use Gnomish Battle Chicken Trinket that summons a Guardian Chicken that fights at your side and has a chance on hit to cast a "Battle Squawk" which boosts Melee attack speed of all Party members by 5%, making it a must-have in every competitive group. The fact that Engineering is also considered the best PvP profession is an added benefit to its power in PvE environment.

There are two paths to choose - Swords Combat Build and Daggers Combat Build. Swords variant wins on DPS, but one might opt for Daggers setup, as it makes getting solid PvP weapons in Raids much easier.

Note: There are two versions of Daggers Build. The second one is based on the Seal Fate Talent from the Assassination Tree and requires a lot of Critical Strike chance (~30%) to work properly, which is not really achievable before Phase 5 without dropping below 9% Hit Cap, which is unacceptable. We will feature this build as soon as Phase 5 starts.

In order to maximize your DPS, you should aim to assemble the best possible Gear. This applies to both Pre-Raid and each of the Raid Tiers/Phases. Also, remember that it is the armament that gives the highest DPS boost, so you should start by getting the best rogue weapons available. Below, we present you the BiS (Bst-in-slot) list for all equipment slots.

Note1: The list will be updated with new items concurrently with the introduction of new Raids/Phases, so remember to visit this page after new Raid opens for an update on what current best Rogue items in each lot are.

In Classic, Rogue follows more of a priority list than a strict rotation. On top of that, the list changes slightly depending on the Weapon (and build) you are currently using)