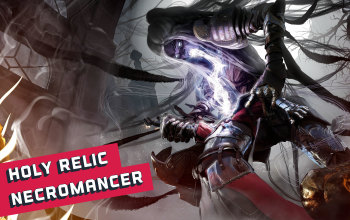 The Necromancer Ascendancy is a great one to use with Minion Skills, and one of them is Summon Holy Relic. Holy Relics are the type of Minions that don't do much on their own, but as you Hit an Enemy with an Attack, they cast a Nova Spell that deals Physical Damage to all nearby enemies and causes Life Regeneration to you and your other Minions. The Attack Skill with the highest Attack Rate and one offering great mobility is Cyclone, link it with Support Gems such as Maim or Life Gain on Hit, it's not supposed to deal any real damage. One of the very few items directly synergizing with Holy Relics is Geofri's Legacy, it increases the Cooldown Recovery Rate of Relics' Nova, and allows you to have one more Relic. The two most important stats to increase your damage in this build are increased Cooldown Recovery Rate for Holy Relics and the Gem Level of Summon Holy Relics Skill Gem.

In terms of defenses it's a standard Minion-type build, but with increased Life Regeneration from the Relics. It's around 4 to 6k of Maximum Life, Armour, capped Block Chance, Maximum Elemental Resistances at over 80%, Offering with Mistress of Sacrifice, rapid Life Regeneration, and some Energy Shield that you can quickly regenerate via Aegis Aurora or Divine Shield. The other Minions you should be using are Animated Guardian, some kind of defensive Golem, and a Spectre granting your Minions a utility Buff. The build is rather cheap, it only requires some Unique Items, and the rare ones have very few stats that would actually benefit your Minions. It's a perfect fit for a newly added Ashes of The Stars Unique Amulet - with a Summon Holy Relic of Divergent Quality your Damage can be increased significantly.

As is the case with most Minion builds, you won't have to do very much on your own. Your Relics, Spectres, Animated Guardian, and Golems will roam around you performing their tasks. You will have to, however, constantly Hit enemies with your own Attacks, a Cyclone in this case. Use Bone Offering for extra Block Chance, it's great when combined with Aegis Aurora, you should reach 75% Block Chance for Attack and Spells with Rumi's Concoction. Use Assassin's Mark, it can be triggered via Mark on Hit and Cyclone. It will increase your Damage. For your Minion you should also use Auras such as Pride and Zealory, these can be linked with Generosity Support. The Auras Recommended for your Character are Determination and Tempest Shield (for Spell Block Chance) or Purity of Ice (if using Melding of the Flesh for nearly 90% of all Elemental Resistances). for a Guard Spell use Molten Shell. Desecrate should be also present, it's useful to activate Bone Offering during long boss fights.

Skeletons will be great for leveling, these Minions deal a lot of damage, making it easy to get through the first acts. You will put most of your Skill Points in Minion Damage and Maximum Life, later to specialize in Block Chance and Mana Reservation Efficiency. The process is very smooth as there are no sudden transitions that would increase your damage significantly. On your gear look for Life, Armour, Resistances, and Minion Damage.

You will only need Life, Armour, Resistances, and Minion Damage. It leaves you with a lot of room to play with some Unique Items such as Melding of the Flesh. It will reduce your Resistances but you're able to easily get more from your gear. It's good when combined with Aegis Aurora, for over 80% of Maximum Elemental Resistances. This Shield is heavily recommended as it recovers ES on Block, which you should have a lot of. A Mandatory Unique Item is Geofri's Crest, it's a Helmet specifically designed to make your Holy Relics' cast their Nova more often. Another very popular Item is the Unique Amulet Ashes of the Stars, it enhances and empowers all your Skill Gems, which is really good for a build such as this one, that relies heavily on Gem Level and Gem Quality for its damage. Speaking of Gem Level - your Weapon should increase the Level of all Spell Skill Gems by 1, it's a rare mod but shouldn't be too expensive. You won't need Accuracy Rating with Resolute Technique, which you should allocate.