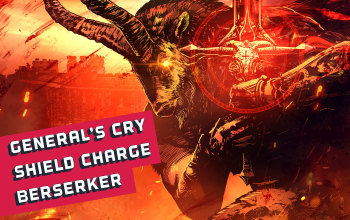 General's Cry is one of the most unusual Warcry Skills in Path of Exile. Unlike all the other Warcries, it's not used to buff your character (or debuff enemies) but it's an ability with the main purpose of dealing massive damage with Attacks. General's Cry summons Mirage Warriors from nearby corpses to use a linked Attack Skill once before dissipating, and their attack will count as Exerted. By reducing the General's Cry cooldown, and increasing your Attack Damage/Exerted Attack Damage, you can make the MIrage Warriors to dish out some insane damage numbers, and use powerful Attacks with much slower than regular intervals - for example, Shield Charge. By using it with General's Cry, you can bypass the skills a very long animation and attack time, which makes it completely ineffective as damage-dealing ability when used on your own. At the same time, this skill takes its damage based on the Armour and Evasion Rating on your Shield, which allows you to use interesting combinations when it comes to your main-hand weapon. In this case, you will be using The Dark Seer. A weapon that can apply Malediction, a powerful debuff that both increases your damage output, and reduces the damage of affected enemies. In order to be able to Blind enemies while you are Blinded (the requirement induced by The Dark Seer) you will be using Second Sight Passive, which can be allocated by using a Brutal Restraint Timeless Jewel.

This is quite a difficult and complex Melee build that utilizes synergies from several Skills. Your main source of DPS will be Shield Charge cast by Mirage Warriors, so you are going to basically spam your General's Cry whenever off-cooldown. In order to "provide" enough corpses and power for it, you will be using the Corpsewalker Unique Boots, and get a Warcry Mastery to increase the minimum power of your Warcries. Normally, you would be using a Redblade Banner, but in this case, you need a shield with the highest Armour Rating possible. You are also going to use Shield Crush - it deals solid damage even on a single link, but what's more important, it will allow you to quickly Blind enemies to inflict Malediction. You can also boost your clear speed by using Call of Steel - in order to do it, you need to socket a level 1 Splitting Steel/Lancing Steel in your equipment, and the skill will be available for you. It will allow you to "consume" Impale debuffs from enemies to deal extra AoE damage around them in form of Reflected Damage. This will basically clear all the enemies on your screen that somehow did not die to your Shield Charge or Shield Crush. You should also use Berserk, Blood Rage, Ancestral Warchief, and Molten Shell for extra buffs to your character - as you can see, this build utilizes a bunch of active skills which for some may be a more interesting option.

We recommend leveling up with a nearly standard Melee character that uses Shield Crush and solely amplifies his damage output by General's Cry after reaching level 24. You should aim to get both setups to at least 4 links, and you should have enough DPS to easily get through the campaign, as long as you increase the Armour Rating on your shield as your progress to the Acts. Redblade Banner is a great Shield to have, not only it boosts the effectiveness of all your Wacries and reduce their cooldown, but it also has a very high Armour Rating for a shield with a level 35 requirement. If you can afford it, it will work just fine for at least 30 levels. Below you can find the basic leveling Skill Gems setups, and several extremely useful Uniques that can be used to aid you on your journey.

Major God: Soul of the Brine King while you are Immunity to Stun with Rite of Ruin, I found Freeze to be too deadly to leave it to Flasks only, so it's important to get the additional Freeze immunity modifier available here

Below you will find the recommended items for our General's Cry Shield Charge Berserker Build. Unlike your typical Melee builds, this setup requires a number of specific Uniques, and while it can be played without those, this would require you to change the setup slightly and, different variations will not be part of this Guide. It's also a build that requires you to have a very high Armour Rating Shield, which can significantly increase the price of your Items, so you shouldn't pick it for a League Starter build or if you are a plain beginner.

If you have any other build requests, or you have any suggestions about this particular setup, please let us know in the comments below. We appreciate all forms of feedback and even criticism :)