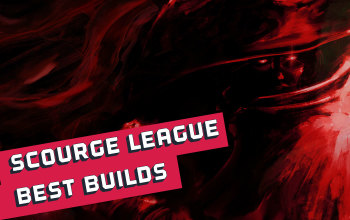 Best Builds and overview of the Scourge League and Patch 3.16

Our list of the Best Starter builds for the Scourge League and Patch 3.16

The Best Starter Builds for Scourge League
and Patch 3.16

The newest 3.16 Expansion - Scourge, introduces many changes to the existing game, most notably a revamp of the Passive Skill Tree - it's now slightly altered and if you're familiar with it, you might notice some small changes. Each cluster - a circular body of small nodes with one or two notable Passives with an effect - now contains a Mastery. To unlock a Mastery you have to get to the notable passive in the given cluster, it typically requires you to spend a few Passive Skill Points on the small nodes leading to it. Unlocking a Mastery costs you one Passive Skill Point and the effect of it reflects the merits of the cluster, making it a very useful asset in most situations. For Example - a cluster that grants you Maximum Life has a heart icon on it, after allocating the biggest node (a notable) in that cluster, you can click on this icon to choose between six Life Masteries, each of them granting you more Maximum Life, Life recovery, and other bonuses correlating to this theme. There is more than one Life cluster in the Passive Skill Tree, but a specific mastery can be chosen only once, so after allocating some of them, you might be left with the ones you don't need anymore, and that's the situation where you typically don't allocate the Mastery - it cost a valuable Passive Skill Point after all. As a result of this procedure, your build can now be more flexible, efficient, and it opens more possibilities for builds previously looked down upon. Just like with regular Passives, you can use the search tool to look for specific Masteries.

The main theme of the Scourge League is a demonic invasion whereas you kill enough monsters on a map, you will be able to shift into a new environment where your task is to kill the freshly spawned hellish creatures within the given time limit. The deaths of these monsters are used to transform items - you can put an item you'd like to be transformed into a special tab, and after a certain amount of slain Scourge enemies, it will change by gaining new modifiers, which are not Implicit or Explicit - these are a brand new type of mods. One of them will always grant you some sort of positive effect, while the other is an undesirable mod. The best-case scenario is to have a negative mod that won't really affect your build, for example rendering you unable to deal cold damage, while you don't deal any cold damage anyway. The item itself will become corrupted, but not in a way it's usually done - by risking the usefulness of the whole item; the only aspects of the item that can be transformed are the Scourge modifiers. A set of new Tainted Orbs is introduced along this league to help you modify these corrupted items - for example, a Tainted Exalted Orb that works just like a regular Exalted Orb but on corrupted items only. An Item can be scourged more than once - up to three times, in fact; each time it gains a next Scourged tier making it potentially more or less valuable - Scourging an item to a higher tier can be more beneficial, and more detrimental at the same time, depending on your luck. Note that Scourging the item for the second and third time won't upgrade the Scourge Mods in a linear way, these will be replaced completely with a pair of new ones, but potentially much more powerful as some mods can be only encountered at the higher tiers. Transforming a map can be especially rewarding, as the mods it can gain are one of the most unique and valuable.

Few new Skills have been added - Tornado, Energy Blade, Temporal Rift, Poisonous Concoction, and three link-type Skills designed for party play. Tornado is a Duration type Spell that deals Physical Damage and can be hit by your projectiles - think of it as a Hydrosphere. Energy Blade is a Spell that enhances your weapon to deal more Lightning Damage based on your Energy Shield, which is now lowered, in a similar fashion to a Reservation type Spell that reserves 80% of your Maximum ES. Temporal Rift Reserves 10% of your Mana and gives you the ability to "rewind time". You can use this Spell to revert your character to the state in which they were last time an afterimage was created - restoring your Mana, Life, and ES too, but the surrounding remains unchanged. Poisonous Concoction is a Spell similar to Explosive Concoction introduced in 3.15, but it consumes Charges from Life Flask and deals Chaos Damage with a high chance to Poison. The Link Spells allows you to Link yourself to a party member granting buffs for both of you, but when the character who's been linked to dies, the user dies as well.

Almost none of the builds has been nerfed (one might argue that Minion Builds lost a lot of damage that could previously be found on a passive skill tree), but some specific ones have received more attention than the other. Defensive stats such as Armour, Evasion Rating, and Energy Shield are improved. Armour grants more Physical damage mitigation, Evasion Rating - more chance to evade hits and Spell Suppression, which gives you a chance to take only a half of the Spell Damage. Energy Shield is now less reliant on Leech - the base recharge effect is easier to get from gear and from the passive skill tree. Ailment mitigation is now too easier to get from various sources, and Ward items grant now more base Ward. Builds that rely on Damage over Time, especially Elemental (especially Ignite), are predicted to be one of the most powerful ones in relation to their previous state. Elemental DoT is no more reliant on Keystones such as Elemental Overload and Elemental Equilibrium, you can pick more specific and suitable effects from Mastery. Picking Maximum Life from Clusters, especially on the left side of the skill tree is now more beneficial due to the Mastery that can provide you with even more Maximum Life, it opens a possibility for Life-based builds that fit entirely within the left part of the skill tree.

The Endgame content has changed as well - Atlas has now fewer maps and the number of regions has been cut in half, so completing the whole atlas won't involve as much grinding as it has been, the passive skill trees for regions have been adjusted, removing some of the Maven's boons from the game completely. There are new chase unique items - ones that are of high value but extremely rare at that, for example, an Amulet with a socket in it that behaves like an additional socket at your Body Armour, making it a 7-link. There is the new, highest tier of Breachstones, Blighted Maps, Timeless Emblems, and Simulacrums. These encounters are extremely formidable, reserved only for the best of the best, a player that's not dedicated fully to the game might stand to chance against this exceptionally dangerous end-game content. There are some minor changes too - Delve has been adjusted so it's easier to start Delving even at high levels, Cadiro Perandus and Perandus Coins have been removed. Unveiling an item unveils all the tiers at once, reducing the grinding. Sacred Blossom boss fight is more rewarding, Guilds can have their own hideouts, Atziri drops has been changed to encourage players to fight this particular boss. You won't need to complete the randomly appearing Ascendancy Trials to unlock the highest tier of the Labyrinth. All these changes have been positively received by the community deeming it already to be one of the best expansions.

Below, we are presenting our top Build Recommendations for the upcoming Scourge League. With all the major changes in Skills, and Passives, it's currently impossible to determine the very best setups for those builds, and with the new Mastery system, there will be plenty of new ways each of the following builds can be made, with very small differences between each approach. We will surely try to update those builds as soon as we get the thoroughly test them, but even if some of those may not be the optimal setup, you can't really go wrong following them in the early stages of the League.

BEST STARTER BUILDS FOR 3.16 AND THE SCOURGE LEAGUE

If you have any suggestions about other interesting Builds and/or Starter Builds for the Scourge League we would love to hear your feedback! The patch introduces a major rework of the Passive System, so it will take a bit longer than usual to test all the possible setups, so if you have any suggestions please let us know in the comments below! Obviously, we will be updating all our Guides over the course of the Scourge League