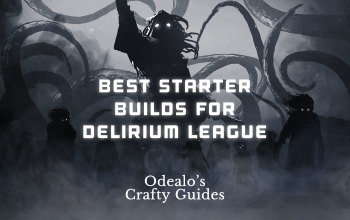 Our top recommendations for a solid Starter Builds for Path of Exile 3.10 and the Delirium League

The Best Starter Builds for the Delirium League and Patch 3.10

Patch 3.10 is going live soon, and alongside it, the Delirium League is starting. The Patch 3.10 once again introduces a number of new Items, Skill Gems, Passive Skill Changes, and game balance changes. Unlike the previous Patches, this time the changes aren't oriented around a single character archetype, but we are getting a massive amount of new Passives from the newly introduced Cluster Jewels to all available builds and characters. In terms of character builds and optimization, it's among the biggest updates ever introduced recently. As we are getting tons of new Passives, we will be updating ALL of our guides in the upcoming weeks - they will surely work as good as they did before in their old forms, but there is certainly a lot of space for improvements and optimization with all the new stuff.

As usual, we primarily focus builds that are fast and cheap on lower levels, but also offer an easy transition to end-game with just slightly higher investments in gear. All the builds on our list are all content viable and you won't have to entirely respecc your character after earning a set amount of Currency for a completely different build.

PLEASE NOTE: The list of the best builds is mainly based on the 3.10's Patch notes and our previous experiences. They will surely work as intended, but some small details may be different when the actual Patch hits the live servers. We will update the Guides as soon as possible after Patch 3.10 is out

If you have any suggestions about other interesting or solid Starter Builds for the Delirium League, or you would like us to make a different build - for example, based on one of the newly introduced Skill Gems, let us know in the comments below! We always appreciate as well constructive criticism as it helps us improve our content!