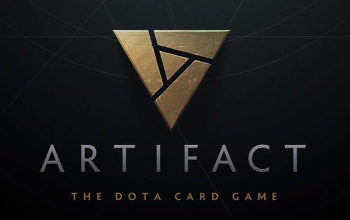 Check out our Wiki page about Artifact - the Dota trading card game. Find the best Artifact Cards, Decks, and more

General information - What is Artifact the Dota trading card game?

Artifact is a trading card game (TCG) developed and published by Valve Corporation. Artifact is based on the widely popular Dota 2, a multiplayer online battle arena game (MOBA). The game sticks to the three-lane theme, where the players' goal is to destroy the enemy towers. Players play out a hero in each lane and support them with Creeps, Spells, and Item cards. In the latter section, you will find a detailed guide on "How to play Artifact?".

How to play Artifact - the Dota trading card game?

Artifact has two players compete with each other in one-on-one matches using pre-constructed decks. Each player uses Main and Item Decks, where the Main Deck consists of Heroes, Creeps, and Spells, whereas Item Deck contains nine Items, that can be purchased in the latter phases of the game. Decks are randomly shuffled. Initially, players start with five cards in their hands and draw two new cards each turn.

The board is composed of three independent lanes, where each player has their Tower, separate Mana pool for each lane, and an area where Creeps and Heroes are played out.

Mana and Gold are the two primary resources in Artifact. Mana, which replenishes each turn, is used to play out cards. On the other hand, Gold is used to purchase items which are drawn randomly at the end of each turn. Players earn Gold by slaying enemies. Killing a Hero grants 5 Gold, and killing an enemy Creep grants 1 Gold.

There are five main types of cards in Artifact. There are four colored types of cards, and Item cards, which can be treated as "neutral" cards and can be used by any Hero regardless of their color. The colors are as follows:

In order to play a Card in Artifact, you need to control a Hero with the corresponding color, in the lane you want the Card to take effect on. With the Exception of Item Cards, which can be played regardless of the Hero color.

Heroes are the most powerful Cards in Artifact. Players may only have five heroes in their Main Decks. Each Hero has their own set of abilities, statistics, and different playstyle. Each Hero is categorized by one of the previously mentioned colors, which dictates what types of Cards can be played by this Hero. Each Hero has three slots for Items on top of their Cards, one for each of the available item types: Weapon, Armor, and Accessory. At the bottom of the Hero card, you can find the Hero stats which include Strength, Armor, and Health.

At the example below, you can see Chen, who currently has no items equipped, has 4 Attack, no Armor, 9 Health. He also has the Holy Persuasion Ability (

) which allows him to take control of an enemy Creep. 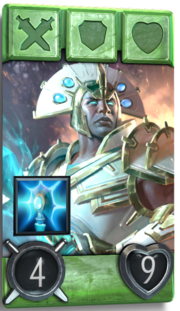 Spells require Mana to be cast, and they have an instant effect on the lane they are cast at. Some Spells may even have an effect on the entire board. In order to cast a Spell of a specific color, you need to control a Hero in the lane you want to play the Spell. There are also specific types of Spells called Improvements. They are played from the Hand just like Spells and provide certain actions or upgrades to the lane. Improvements, for example, can damage enemies or heal allies during certain phases.

Creeps are creatures that are cast in a similar way to Spells. They also require a Hero of a corresponding color in the lane they are supposed to be played on. Creeps, just like Heroes, have their own Attack and Health attributes, however, they can't use Items. While Creeps can be played from the Hand, there are also certain Item Cards like Horn of the Abyss and Book of the Dead, that when equipped on a Hero, allow him to summon additional Creeps.

Items are purchased with Gold during Shopping Phase at the end of each turn. They have no Mana cost or color restrictions after they have been obtained from the Shop. There are four main item types including Weapons, Armors, Accessories, and Consumables. During the Shopping Phase you can buy Artifact Items for Gold in three different Shops:

The flow of the game

A game of Artifact is divided into Rounds, Lanes, and Phases. Each Round is played over the three Lanes, and each Lane consists of multiple Phases. At the start of each Round, player's Mana replenishes, and Heroes and Creeps are deployed to the board. Shopping Phase ends every Round and each player can purchase Items during it. This can be referred to as the Action Phase (when Cards are being played out) and after it ends there is the Combat Phase when Heroes and Creeps battle each other - during it, casualties are inevitable, and Gold is earned.

There are two ways to win a game of Artifact. You can either destroy two enemy Towers or destroy the middle Tower and the enemy's Ancient. Players should decide beforehand which way they plan to follow to victory and adjust their gameplay and strategy accordingly.