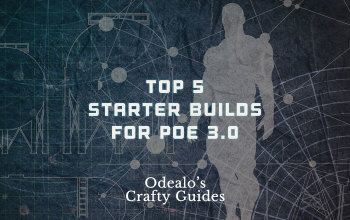 The Fall of Oriath expansion went live on August 4th, 2017.  Alongside with it, the new Harbinger League was launched, and we have decided to test out all the new challenges for ourselves. The newest Path of Exile Expansion has brought a vast number of changes to the majority of builds and skills. We did find it simply appropriate to update the Top Starter Builds List, and we choose 5 builds that are the best League Starter builds.

A good starter build is a combination of speed, high damage (for both single target and AoE) and the ease to gear up without excessive spendings (meaning, anything from the list should cost more than few Exalted Orbs). Usually, the best starter builds are not only considered budget builds but can also clear nearly all end-game content with properly upgraded equipment.

Once again the Top Starter Builds are the Totem builds. 3 out of the Top 5 we have listed, are Totem build. They prove to be extremely effective with not much gear(or PoE Currency ) requirements. There is also one complete newcomer to the Top 5 list - the Glacial Cascade Mines Build - which just recently became extremely popular among Harbinger players. Let's get down to it.

Update 25th August: We have added the Frostbolt Miner Saboteur as the new Number One Starter Build. We have personally tested it just recently, and it is the best build we have seen so far. It runs on a very low budget, with no extra investments for smooth leveling, and barely 100 chaos orbs to get into mid-tier mapping! Behold the new Starter Build's King!

Frostbolt Remote Miner [SHADOW SABOTEUR] - this build is extremely fun and powerful. Leveling is easy with barely the 3linked wands and Fire Nova Mines. After swapping to your final gear you will find a completely new type of enjoyment in Path of Exile. This has also been confirmed you can build this Saboteur for successful mapping in a barely 100 chaos budget on the newly formed League. Enjoy

Baron SRS Build [NECROMANCER WITCH] - SRS (Summon Raging Spirits) builds have been very popular for quite some time now. Even with the recent nerf (15% Damage reduction in 3.0)  it's one of the most popular Starter builds out there. It provides amazing mobility, damage, and what is possibly the most important factor - fun. Raging Skulls roaming around the entire map and annihilating enemies is an eye candy ;) The Baron version of this build provides the highest damage output out of all SRS variations. Until you get ahold of the Baron helmet, it will be still extremely powerful with a decent rare bone helmet equipped (keep in mind you shouldn't enchant the helmet, as it will remove the minion damage bonus)

Righteous Fire Totem Build [BERSERKER& CHIEFTAIN] - This is the first out of the 3 Totem builds we have listed. In our opinion, it provides the highest dmg out of all the other builds on the list. It simply melts enemies with ease and is capable of clearing all Path of Exile's content. This build is only lacking mobility, and you might find it a little bit slower than the others.

Ancestral Warchief Build [BERSERKER MARAUDER] - Another Totem, and another Berserker build. This one, however, relies on brute strength and high physical damage. This is yet another build that proves, that you can easily gear up a powerful character with just a little bit of PoE currency investment.

Glacial Cascade Miner [DUELIST SABOTEUR] - This was one of the first builds we have decided to test out, as it relies on rather niche mechanics. We tried the Tremor Rod version, and we have to admit it's one of the most powerful builds out there. Amazing AoE, decent single-target damage, good mobility, and well, playing something completely new and different gives a lot of fun. Our version introduces a rather different approach to the build with extra Chaos damage addition and MoM passive node

Flameblast Totem Build [INQUISITOR TEMPLAR] - The 3rd and the last of Totem builds closes our The Best Starter Builds List. It's the Flameblast Totem Templar, which relies on the extreme damage of the Flameblast spell, and with the use of Spell Totem Gem, the necessity to stand still for the channeling part was removed. Spell Totems channel the Flameblast spell, which is cast at 10 stacks for maximum damage. Pretty much anything on the map is one-shotted with not much gear requirements. The only downside to the build is its' high dependency on cast speed and lack of control over how and when the spell is cast. Totem logic handles the targeting, so you might need to get used to it.

The list above consists of builds that are more than just good League Starter builds. They will work nearly as effective in the late game if geared properly. What's most important about the builds above is the fact, that none of them will require excessive currency investments. They don't rely on extremely expensive gear either, while still allowing players to approach all the Bosses and Uber Labs.

If you have any suggestions about other Starter Builds, that could possibly appear on our list, please let us know in comments below.