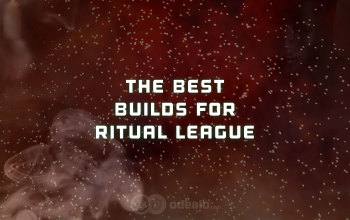 The Best Builds and Starters for the Ritual League and Patch 3.13

The best PoE Builds for the Ritual League and Echoes of the Atlas - Patch 3.13

The Best Builds and Starters for the Ritual League
Echoes of the Atlas - Patch 3.13

The Ritual League and Echoes of the Atlas expansion are launching soon so once again we have decided to make a list of the best 5 builds. Patch 3.13 introduces major changes to Elementalist, Inquisitor, and Deadeye classes, and numeric changes to most of the other ones as well. We are also getting new Skills, and tons of already existing skills will be changed, which opens up tons of new powerful build options. Furthermore, because of the newly introduced Boss encounters, the type of build you want to play while dealing with the end-game content, drastically changes in Patch 3.13. Both Rituals and Echoes of the Atlas mechanics will throw you into a circular area where you fight multiple Bosses and/or enemies. First of all, you are looking for a build with very good self-sustain and solid defenses that will allow you to survive during those encounters - mainly against multiple Bosses fights from Echoes of the Atlas. Obviously, you want good AoE damage to simultaneously deal high damage to all enemies in the area, but at the same time, you want a high single-target DPS skill that can be used to aim at a specific, most threatening enemy. For that reason, you may want to skip Totem and Minion builds, first of all, they may die easily, and also, they aren't the best when it comes to targeting a single enemy while in the middle of a crowded battlefield. The best builds will deal damage "passively" while you are running around in circles avoiding getting hit, and basically avoiding tons of other AoE effects and ailments you are surely getting inflicted on you. We expect the best builds to rely on Damage over Time and/or on-ground effects. Tanky Melee builds may also be good, with plenty of buffs for some popular AoE/Melee Attacks. Brands, Traps, and possibly Mines too, maybe really powerful. And, presumably the number one pick this League will be Chieftain. As a class, it offers amazing self-sustain, tons of extra Fire Damage. You can easily make greater budget-friendly Starter builds as a Chieftain. Our #1 recommendation, Blade Blast Chieftain is surely going to be extremely popular, the only downside may be how expensive the items get with so many players playing it. But you can also try out Righteous Fire/Searing Bond with good results for sure. As the League progresses, we will be updating and adding the most popular builds out there so stay tuned.

PLEASE NOTE: The following list is based on our team's overall experience from previous Patches and currently available data about Patch 3.13 and the upcoming Ritual League. We will be updating our guides as soon as the Patch goes live and we have more thorough testing completed.

If you have any suggestions about other interesting Builds and/or Starter Builds for the Ritual League, or you want to request a completely new build (for example based on one of the newly introduced Skill Gems) let us know in the comments below! We always appreciate constructive criticism as it helps us improve our content!