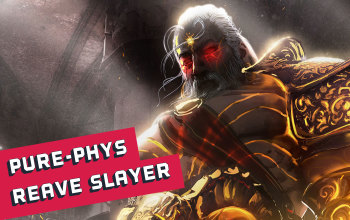 Reave is an Attack that has a short initial range, but after the first four Hits, it grows a fair amount. When deciding to play a version suited for Physical Damage, it's recommended to pick Slayer Ascendancy. Slayer specializes in among other things - rapid Life Leeching, Boss Killing, and high Melee Physical Damage. Physical Attack builds, such as this one, often use the Game Mechanics such as Impale and Rage. Impale is a stackable Debuff that basically deals Damage as you repeatedly hit an enemy. Rage is a stackable Buff that increases your Attack Damage, Attack Speed, and Movement Speed as you keep Hitting foes, you can later spend Rage on Berserk in exchange for a powerful Buff. Combined with Pride Aura it makes your DPS and AoE grow over time as you keep attacking opponents, which is perfect for killing bosses.

You should be able to achieve 6k Maximum Life with a lot of Armour and Block Chance. Your Endurance Charges, Purity of Elements, and Fortify form an additional layer protecting you from Damage, but your best survivability tactic is your Life Leech - as a Salyer with Brutal Fervour you can Leech very fast, and the effect of Leeching is not removed on Full Life. You also take no Reflected Physical Damage and reduced Damage while Leeching. The Reave Attack deals exclusively Physical Damage, which is then increased by multiple other Active Skills and Passive Auras. Reave Skill Gem has also a Vaal variant of it which has better AoE and much higher Damage.

The gameplay consists mostly of using Leap Slam to move around and attacking groups of enemies with Reave. During Boss fights use your Vaal Raeve, place both Ancestral Totems to boost your Damage and activate Berserk. This high damage spike should kill most of the bosses in seconds. Use Mana-reserving Skills such as Pride, Precision, Purity of Elements, Blood and Sand, Herald of Purity, and Dread Banner. Blood Rage Buff is supposed to stay active at all times. Vulnerability Curse should be applied via Ring Affix.

You can start with Reave right from the start, but you can use literally any other Melee Attack such as Sweep or Perforate. Just be sure that the Attack doesn't convert your Physical Damage to any other Elemental type of Damage after you acquire Brutality Support Gem, or after you start to specialize in Physical Damage exclusively. Keep your Elemental Resistances High as to not die, and regularly check if you qualify to equip better level-restricted items.

A weapon you're supposed to use is a one-handed Sword, preferably a good Paradoxica or a Rare Foil. A shield can provide you with Block Chance, but most importantly you're able to find an Affix that increases Mana Reservation Efficiency for socketed Gems if you need any. The build can be played with no Unique Items, however, Aul's Uprising Unique Amulet allows you to cast one of your most expensive Auras for free so it's definitely worth buying. Getting enough Dexterity and Intelligence might be a hassle, but not a big one, one or two mods should be enough to cover your need for these Attributes. Try to achieve a 100% chance to Impale on Hit as it's your primary Damage source. Look for Maximum Life, Resistances, Armour, and Block Chance to increase your Defences, and Melee Physical Attack Damage and Critical Strike mods for offences.