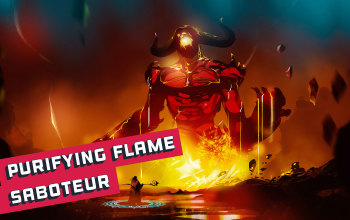 Purifying Flame is one of the most beginner-friendly mine-based builds currently in the game, it’s cheap when it comes to getting mandatory equipment and its overall high damage not only to single targets but also packs of mobs makes it one of the strongest contestants for a league-starter. There are many variations of this build, even the gear stated as mandatory is not really required, but for the sake of simplicity, it will be declared as such in the version I’m about to present. Consecrated Ground – a mechanic inherent to this skill elevates the survivability of the character, whilst it also provides a huge damage bonus – 6% of Maximum Health regenerated per second and 100% Increased Critical Strike Chance against enemies standing on it. The main quirk that makes this build stand out from other generic mine builds is the necessity to venture to the left side of the skill tree – it is a crucial condition shared among all the variations of this build and will be explained later in the guide.

For a Saboteur to use Purifying Flame might be counter-intuitive at first, for all the notable nodes increasing Fire and Physical Damage are on the opposite side from the Shadow’s starting location on the skill tree, however, the fact that that we’re using it with Multiple Mines makes each mine explosion deal damage to all the enemies standing on the Consecrated Ground – created by other mines. It’s just the Shadow’s ascendancy – Saboteur that makes it all worth the trouble. This mechanic makes this build one of the best clearing mine builds.

For people already acquainted with the Mine or even - Trap builds, no introduction on how to play it is really needed, it plays like a standard mine build. The key element to smooth clearing is to have a “Detonate Mines” on left-click (or any other key that is used for walking). It’s a white skill gem one can get from Lilly Roth in act 6. Of course, some people prefer to have an option to stay still while throwing mines, or to throw mines in the direction they’re not moving  - mainly for boss fights sequences. Standing on Consecrated Ground - as mentioned before - increases your health regeneration so it’s good to keep that in mind.

Before you’re able to reach fire nodes on the Skill Tree, you can use any mine really, especially skills with an innate “mine” tag, granting you one extra Support Gem slot by removing the need for the required “Blastchain Mine Support”. Self-casting Purifying Flame is a bad idea for you will start picking up Mine Damage nodes early on anyway. By the time you reach level 41 - the level required to wield Tremor Rod - a unique staff, the weapon of your choice should have added Mine or Spell Damage correlating to the type of Spell Damage your mines are dealing (mines are also spells). And as with every other build, do not neglect the defensive layers, especially after act 6. If more damage is needed - use a Brand Skill with Hextouch and Curse (Hex). For movement use Flame Dash. If you own Tabula Rasa, at level 8 you can already link Gems as listed below.

36 Points Skill Tree
Priorities: Go for Volatile Mines cluster and then the big Mines and Traps cluster on the right grabbing other very useful notables on the way

57 Points Skill Tree
Priorities: After that head for the Phase Acrobatics Keystone, and then Wind Dancer Keystone. Grab nearby notables with Maximum Life

71 Points Skill Tree
Priorities: The next step is getting the Avatar of Fire and there are many viable paths to reach it. The bottom one I pictured is the most common due to Mana and Spell Damage, but you are very welcome to consider other options

Major God: Soul of the Brine King  You cannot be Stunned if you've been Stunned or Blocked a Stunning Hit in the past 2 seconds

In this section, you will find the recommended Items for our Purifying Flame Miner Saboteur Build. This build should be quite easy to set up as it requires only a few specific Uniques. This guide shows the Life version build, it is more accessible and can be later converted to Energy Shield which offers much higher damage thanks to using multiple powerful Spell DPS Auras with increased effectiveness.

If you have any feedback about this build or suggestions for the next one, please let us know in the comments below! We are always glad to make all kinds of build guides, from end-game monsters to beginner-friendly and budget builds just as this Purifying Flame Miner Saboteur!