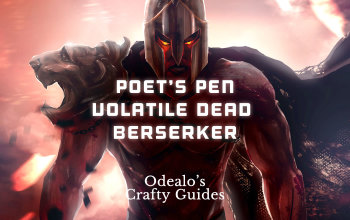 One of the most satisfying builds in Path of Exile patch 3.1. Very fast spellcaster build based on new corpse-based Fire spells

This is probably one of the most satisfying builds in the game. New unique added in patch 3.1, The Poet’s Pen allows you to play this crazy build, sending Fire Balls all over the screen. Having your gem setups in both wands allows you to wear Kaom’s Heart, which combined with Mind over Matter makes it very tanky build as well. The main idea is to use an attack skill, which triggers gems socketed in The Poet’s Pen wands, casting three skills at once.

Poet's Pen Volatile Dead Berserker is a ranged build, which will do most of the work for you. You are running around, attack with Frenzy skill and skills triggered from Poet’s Pen will clear the screen by themselves. It’s very relaxing build to play because you don’t need to aim at monsters and really high life pool combined with Mind over Matter will make you really tanky.

It’s probably one of the easiest and fastest leveling builds in the games. You can use your endgame weapons since level 12, so you don’t have to worry about changing equipment every few levels. You will also notice a huge damage increase every 25 levels thanks to Poet’s Pen increasing level of socketed gems.

We recommend killing all bandits for the additional 2 passive points

Minor God: Soul of Gruthkul - 1% additional Physical Damage Reduction for each Hit you've taken Recently up to a maximum of 5%

Poet's Pen Volatile Dead Berserker is a budget and beginner-friendly build. It does not require more than 4 sockets in any of the gear and does not lose any of the core DPS. Your main weapons have only 3 linked sockets, and all the other gear is used for utility and defensive gem setups. This makes this build extremely easy to gear up, and at the same time, it scales well with end-game high spell damage gear.

In this spot, we are also delighted to invite you to our PoE Currency marketplace, where you can buy cheap orbs and unique items.