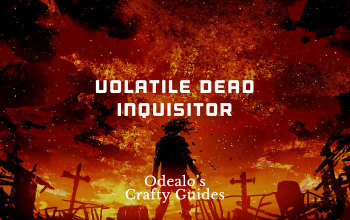 One of the most enjoyable Inquisitor/Templar builds in Path of Exile. Powerful Poet's Pen-based Crit. Spellcaster

This is one of the most enjoyable builds in Path of Exile. We have previously made a Berserker build based on the Poet's Pens wands, but since patch 3.2 and the redesign of Berserker Ascendancy class it is no longer efficient. This led us to make this Templar Inquisitor guide, which provides the highest end-game DPS out of all Ascendancy classes in this setup. This build utilizes the newly added Gems in Patch 3.1 - Volatile Dead, Unearth, and Bodyswap which complement each other in a fascinating way.

You can also find the full list of our other Path of Exile Builds right here: Odealo's Crafty Guides - Full List

Poet's Pen Inquisitor is a ranged build, which relies on high Attack Speed of your Frenzy Attack Skill. Frenzy will trigger spells socketed in your Poet's Pens wands and generate Frenzy Charges for even higher Attack Speed. Volatile Dead, which is your core spell will provide amazing DPS and instantly clear entire screens. This makes it one of the most enjoyable and visually appealing builds out there.

It’s one of the easiest and fastest characters to level up. You can use your endgame wands (Poet's Pen) starting at level 12 so you don’t have to worry about changing equipment every few levels.

We suggest killing all the Bandits for two additional Passive Points

Poet's Pen Inquisitor is budget and beginner-friendly build. It does not require anything above 4 links and the core items shouldn't cost more than few Exalted Orbs. Your main weapons have only 3 sockets, and all the other gear is used for utility and defenses. This allows most of the items to be standard Life/Res rares, making the gear very easy to obtain. At the same time, the build scales very well with end-game high Spell Damage gear.

If you would like to try out this build but lack PoE Currency, we are delighted to invite you to our POE Market section where you can buy cheap Orbs and Unique Items.