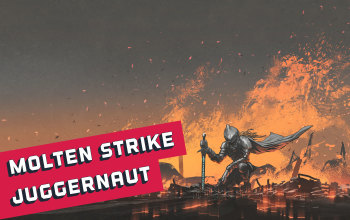 Molten Strike Builds has recently experienced a surge in popularity due to the new possibilities for Juggernaut Class on the Passive Skill Tree, Masteries being one of the most influential changes. As Juggernaut, you have access to one of the best defensive Keystones in the game, your maximum Life, Armour, and Life Regeneration are extraordinarily high, you're permanently Fortified, and with your Shield with Life on Block, and high Block Chance there's a little to no way you can be killed. Undeniable covers your Missing Accuracy Rating and grants bonus Attack Speed for your Attacks, while Unbreakable provides you with Armour and Life Regen. This build uses Grelwood Shank as the main hand Sword, other Unique items such as Xoph's Blood are optional. While Stationary your character grows much stronger as the Sword grants you a lot of Armour, and with Natural Affinity your defences and damage are increased.

Some of the most important Masteries are Fortify on Melee Hits and additional targets for Strike Skills with Tribal Fury. Additionally, there are some game-changing Keystones you should consider taking such as Iron Grip, Elemental Overload, and Point Blank. Compared to a regular Skill, your Molten Strike creates much more Projectiles that deal increased damage, it targets more enemies, while you can attack around ten times per second. Being Stationary is usually a big downside since avoiding attacks is important in most cases, but with such a sturdy build you can brush off most of the Hits. You will be able to use Kaom's Heart as your Body Armour given that your Elder-influenced Helmet is supported by Immolate and Concentrated Effect.

It's a Melee Strike build which makes it a bit clunky compared to other builds with better range and AoE, but the extra targeting and the spread of the Magma Balls make it possible to deal with a whole pack of enemies with just a single strike and then move to the next one. Use Spells such as Blood Rage for higher DPS, and Flammability Curse that should be applied on Hit. With your Cast when Damage Taken Gem you should use Immortal Call and Wave of Conviction to trigger them automatically as you take damage. Leap Slam or Shield Slam are good mobility options. Anger, Blood and Sand, and Tempest Shield are recommended Mana-Reserving Spells. For Boss fights use your Ancestral Totems with Culling Strike, and try to stand still for as long as you can.

You can start with Molten Strike supported by Ancestral Call, but any Attack that deals primarily Fire Damage is good at the start. Smite and Glacial Hamer are not recommended since it's easier to get more Fire Damage than any other Elemental Damage at first. When your Strike Skill is supported by Ancestral Call the levelling process is smooth and fast with a gradual transition into the endgame build.

35 Points Passive Tree
Get the Maximum Life from Heart of the Warrior and Discipline and Training, go for Art of the Gladiator, and allocate nearby nodes that increase your damage

68 Points Passive Tree
Get more Life from Constitution, Bloodless, Devotion, and Life Masteries. For Damage take Iron Grip Keystone, Tribal Fury, Lava Lash, and Blade of Cunning. After heavily investing in Fire Damage specifically, be sure to have a Fire Mastery to convert the remaining Physical Damage to Fire.

It's a Melee Sword build that deals Fire Damage converted From Physical Damage, look for added Fire or Physical Damage, especially to Attacks, Attacks Speed, Accuracy Rating, increased Physical, Fire, or Elemental Damage, and Fire or Elemental Penetration. For better clear speed seek an increased number of Projectiles, increased Area of Effect, and especially the ability for Strike Skills to target an additional enemy. You don't need to look for Critical Strike Chance and Multiplier or Damage over Time. For defences look for Block Chance and try to cap it at 75% along with Elemental Resistances. Maximum Life is your primary and the most important layer of defence so prioritize it. Armour and Evasion Rating are great to have, especially on Body Armour. Look for additional Dexterity for Blood Rage - at least 155 in total.