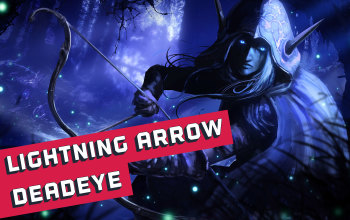 Deadeye build that uses Lightning Arrow. It's a simple build that's cheap to assemble and expensive to min-max

Lightning Arrow is a recently buffed, popular skill among Deadeye characters, it can be played as a starter build and it's also SSF-viable. It's rather on a softcore side of the survivability spectrum, but it makes up for the low defense with one of the highest damage in the game. Lightning Arrow is an extremely basic Bow Attack - it fires an Arrow, that upon landing struck the enemy with lightning damage that also hit adjacent targets. Enemies Shocked by this attack will take much more damage, and despite the damage conversion to Lightning, the main type of Damage dealt by Lightning Arrow is going to be Cold Damage. A portion of Physical and Lightning Damage will be converted to Cold with some added Cold Damage from various sources. The use of a Hydrosphere will increase damage by drenching enemies - hitting it will also deal damage to nearby enemies so it's good to have one constantly moving.

The build is Life-based with a lot of Evasion Rating and Chance to Dodge Spells and Attacks. The Health pool looks really poor, even when taken into account the other defenses, it can be safely assumed that it is a glass cannon build, and the best way to survive is to kill anything that pops on the screen instantly. Using Bow often allows you to have two six-linked setups. One will be used for single targets, and the other for fast clearing. Deadeye ascendancy specializes in Bow Attacks so it's an easy choice, It is recommended to take Richochet and Endless Munition. Richochet combined with Hydrosphere allows your Arrow to bounce an additional time. Other Ascendancy Keystones worth considering are Far Shot, Gathering Winds, and Focal Point. There are no Uniques that are necessary, but a lot of them are immensely helpful, some of which can be somewhat expensive.

It's a simple bow build, you shoot enemies with Lightning Arrow while trying to stay at a safe distance (unless you have Point Blank). Use one setup for clearing, and the other for single targets. The build is so flexible that you could even swap Lightning Arrow for Ice Shot on your single target setup, but the main difference will be in Support Gems such as Barrage Support for focused fire. Asenath's Chant is a Unique Helmet that casts socketed Spells when you Attack with a Bow - it is commonly used to cast Curses, Wave of Conviction, or Hydrosphere. If you don't have it, cast Hydrosphere manually. Herald of Ice, Hatred, and Precision will increase and convert your damage to Cold. For Curse use Sniper's Mark and as a movement Skill use Dash or Flame Dash. Immortal Call combined with Cast when Damage Taken is a great choice for a Guard Spell. Additionally, use Blood Rage for more Attack Speed, Life Leech, and to gain Frenzy Charges.

Before level 12 you can use any Bow Attack, after that Lightning Arrow will be granted upon entering the Caverns in act 1. As you will notice, you will deal mostly Lightning Damage for now. Conversion to Cold Damage is taking place after you get some of the recommended Unique Items which add Cold Damage to Attacks, for example, Void Fletcher, Mark of the Elder, The Pandemonius, Hyrri's Ire, or Hyrri's Demise. You could keep your Lightning Damage for the endgame, but it's just not recommended. Before you're able to equip such items, use mostly rares that add Physical or Elemental Damage to your Attacks, also Additional Arrows are the best mods to look for on your Bow.

KIlling all three Bandits for two Passive Skill Points is the best option, but you can also Help Alira for more Mana Regen, Crit Multiplier, and Elemental Resistances

Although you can use only Rare Gear, it is not recommended. Unique Items listed here will significantly elevate your damage and survivability. The general principle to follow is really simple because it's a painfully generic Elemental-Attack-Crit build. Cap your Elemental Resistances, get as much Maximum Life as possible, and increase your damage by looking for mods such as Physical/Elemental/Cold/Projectile Damage with Bows/AoE/Attacks and increased Critical Strike Chance/Multiplier. This version of the build uses Point Blank and Chin Sol for a close-distance style of combat. With the huge amount of unique items, the hardest part of gearing up might be to cap your Resistances and to get the necessary 80 Strenght and 155 Intelligence.