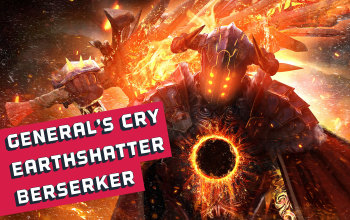 General's Cry is a very specific Warcry, after using it you summon Five mirage Warriors that perform an Attack linked to this Skill Gem. These are not Minions, it's an extension of your own Attack and is treated as such, just like Mirage Archers. There are however some differences we will mention later. You can't conjure them out of thin air, first, you need to create a Corpses via Desecrated Ground which is cast while you're Channeling Cyclone. The Warcry is typically used alongside powerful Attacks such as Shield Crush, Shield Charge, or Blade Flurry. This build uses Earthshatter - an equally good candidate for this role. Each Earthshatter, besides dealing their initial damage, creates five Fissures near you. These Fissures summon Spikes that can be detonated by using Slam Attack or Warcry, which is the case here. General's Cry is also a Warcry with the lowest Cooldown, it can be used approximately every 1,7 seconds. It generates a feedback loop where you create Mirage Warriors, which set up multiple Spikes, and these are then detonated with the same ability that summons the next batch of Mirage Warriors. You're able to have up to 15 of these at the same time, and the best part is, the damage of each can Hit the same enemy for a shotgun effect. It can be extremely powerful against bosses.

Berserker is the only viable ascendancy, it possesses War Bringer Keystone granting Rage after performing a Warcry, and upgrades your Exerted Attacks, which includes Spike Damage. Note that Mirage Warriors can't Exert their own Attacks, but the Spikes detonated by you using your Warcry are counted as your Hits, thus Exertion will apply to them, but not the initial impact. To generate more Rage pick Crave the Slaughter and Rite of Ruin. This maneuver will significantly upgrade your Damage, as will the Aspect of the Carnage Keystone. The build can use any weapon, it's even suited for unarmed combat with Facebreakers. We've settled on a powerful rare two-hand Warstaff, which has high base damage but takes away the secondary weapon slot, which would be a great opportunity to equip Redblade Banner. It would drastically improve your Rage generation. You can consider both options, for a two-hand setup as well as a Shield version - the difference is barely noticeable, a matter of relocating a few skill points on the skill tree. The build deals exclusively Physical Damage with Critical Strike Chance at around 50%. It has high Maximum Life and a lot of Armour.

As is the case with most of the General's Cry Builds, this one uses Cyclone linked with Cast while Channelling and Desecrate to spawn corpses continuously. You also have to constantly activate the General Cry itself to activate Eartshatters. It makes it feel like a regular shockwave cyclone build, but with a rather significant delay. For more Attack Speed and Damage use the two Ancestral Totems. Berserk is also an obvious choice for a quick DPS boost among all Berserker players. You should also passively use Blood Rage for extra damage and Leech. For a mobility Skill we've picked Leap Slam, and for a Guard Spell - Molten Shell. As for the Auras, the best options are Pride, Determination, Precision, Herald of Purity, Dread Banner, and Flesh and Stone. For a Curse, we can recommend Vulnerability, and if your Critical Strike Chance is exceptionally high - Assassin's Mark.

As a Berserker, we recommend starting with an Attack Skill. At first, you can pick any, but the further you progress your options narrow down more and more leading you to a specific fully Physical Damage Slam Attack with a two-hand weapon. General's Cry is good only after you have the Cyclone/Desecrate setup ready, the Skill Gem has a somewhat high level, and you've allocated Call to Arms with some extra Warcry Cluster and Masteries for more Cooldown Recovery Rate. We recommend starting with a Ground Slam or Cleave depending on your weapon type. Leveling through acts should be easy if you're well-equipped. Your weapon has the biggest influence on how fast can you get through it. There are some unique ones you might consider equipping.

70 Points Skill Tree
Head for more Maximum Life, Chance to Impale, Mana Reservation Efficiency, and the damage of appropriate type - we've allocated a two-hand damage cluster. The next step is to allocate Cluster Jewels if you have them, Jewels Sockets, and Critical Strike or Warcry nodes.

Minor God: Soul of Abberath: 60% less Duration of Ignite on You; Unaffected by Burning Ground

The build uses mostly Rare Items, they're just better in most cases. Try to aim for a lot of Resistances of all kinds, Maximum Life, and some Armour. Mana Reservation Efficiency might be an issue if you don't have Aul's Uprising, but ultimately it is the only piece of equipment needed to activate all the above-mentioned Auras. Attack Skills are usually very cheap, but you can still lower your dependency on Mana by lowering Mana Cost of Skills by Ring or Body Armour modifiers. It's a Crit build so you might want to invest in Critical Strike Chance, but most likely won't reach 100% Critical Strike Chance anyway. Look for added and increased damage with Attacks, only the Physical kind. Attack Speed is not very important, you're limited by Warcry Cooldown anyway. You will probably need a small amount of Dexterity and Intelligence too. Remember to gain enough Accuracy Rating.