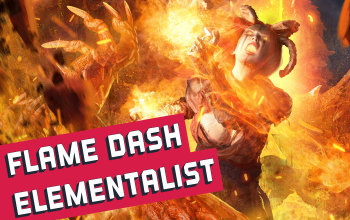 An interesting build where Flame Dash is the main damaging ability

Movement Spells are rarely considered a viable damage source, certainly not the main one in a build, so you might be surprised to see that a Flame Dash can become a foundation of a functional Burning Damage setup. Divergent Flame Dash has a unique property - it deals 2% more Burning Damage per 1% Gem Quality. Note that's "more", not "increased" which in this case is much better. We are then able to increase the Quality by up to 74% resulting in 148% more Burning Damage just with Ashes of the Stars and Enhance Support. DOT Skills scale up really well with Gem Level, so the main setup will be located in Bronn's Lithe - a Body Armour which has been improved in patch 3.19 to increase damage with Movement Skills and grant them 5 extra Gem Levels, which is unheard of for the regular meta Spells. To increase Cooldown Recovery for Flame Dash and use it without the need to stop, it's required to Anoint Fleetfoot Notable and get Watcher's Eye with a specific Haste modifier. The burning trail of Flame Dash is not very wide so to have bearable clear speed the only required item is Berek's Respite which spreads Ignite on death.

The Damage of Flame Dash consists of two components: the Ignite Damage caused by Hit, and the Burning (not Ignite) Damage caused by Burning Ground. Both of these are Fire Damage over Time effects and the damage of them is split roughly into two equal parts. Keep that fact in mind, there are a lot of modifiers that affect only Ignite Damage, so it's better to look for the more inclusive Burning Damage modifiers. The build is extremely effective against stationary targets that will stay in the Burning Ground. For Defenses, it uses Armour and Evasion Rating sourced mostly from Auras. It is able to gain Block Chance with a Shield and high Spell Suppression Chance with expensive rare gear. The build has around 4k of Maximum Life, it again depends heavily on the gear, and a rapid Life Regeneration due to Immortal Flesh Belt. Another addition is Primal Aegis as one of Elementalist's Keystones. Energy Shield is used only as a source of Mana with Eldritch Battery, it will be needed to cast Divine Malevolence.

The gameplay is unusual as you're using Flame Dash not only to deal damage but also to move around faster. It makes this build very quick. The Ignite will spread on enemies' death, dealing enough damage to kill any magic or even rare monster instantly. Vortex can be used passively as you move to Ignite and kill bosses via Culling Strike Support. For a Curse use Flammability, cast via Orb of Storms with Combustion. Molten Shell is being cast automatically via Cast when Damage Taken. For Auras the build uses Determination, Grace, Defiance Banner, Haste. and temporary Malevolence with Divine Blessing Support.

A compelling leveling guide for this build can be found here: Witch Leveling Guide using Ignite.

If you have played a Righteous Fire build before then you know what to prioritize. Here, however, you might also find Ignite Damage useful, not as useful as Burning Damage, but it is still a source of half of your total damage. Another difference is the multiple Unique Items the build requires to function properly. Bronn's Lithe and Berek's Respite are must-haves. Ashes of the Stars is better than any Rare Amulet, and so probably is the Polaric Devastation Ring. Besides these gear pieces, we can also recommend the Forbidden Jewels for an extra Keystone and Brutal Restraint as you will need a lot of extra Dexterity for all the Gems. Try to gain as much Maximum Life, Resistances, and Dexterity as you can from your rare gear. Spell Suppression and Block Chance can also be utilized to improve your defenses. For Damage, seek Burning Damage, that is Fire Damage over Time. Fire Damage and Damage over Time are good too, but usually the more specific the mod, the more potent it is.