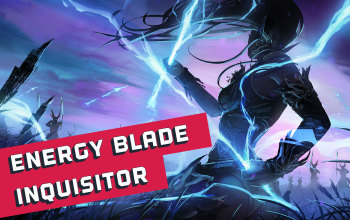 Energy Blade is the most unusual Skill in Path of Exile. It's one of its' kind ability, that converts around half of your Maximum Energy Shield to create a weapon that has base Lightning damage increased by the amount converted that way (further multiplied by 50% if you are using a two-handed weapon). Your equipped weapon (or weapons) will not grant any other bonuses except for the Lightning Damage generated by Energy Blade, but you can still use Gems socketed in them. With approximately 10,000 Maximum Energy Shield, your weapon will have around added 110-2300 Lightning, and with 1.7 Attacks per Second on your Energy Blade, you end up with around 2k Elemental DPS one-hander. It may seem like a lot, but half of that Energy Shield will be removed, so you will be left with only 5,000, and you will not benefit from any other bonuses your regular weapon would normally provide. In order to fully utilize this mechanic, we are going to use Inquisitor with Battlemage Passive, causing all that damage to be applied to your Spells as well. By stacking Strenght and Intelligence, you can get enough maximum Life, Energy Shield, and Critical Strike Chance bonus from Righteous Providence to make a very powerful Cyclone Cast on Crit. build.

The triggered Spell of choice is Arc, which provides great clear speed, has decent damage effectiveness, and deals additional damage against Bosses when it cannot chain. Thanks to the extra added damage from Energy Blade, and 100% Chance to Crit., you will have enough damage to deal with basically any content in the game. When it comes to defenses, it's not as simple as this build uses a lot of different mechanics that synergize exceptionally well on your character. First of all, since half of your Energy Shield is gone by default, it's best to play a hybrid Life/ES Build. On top of that, you will be using Petrified Blood to mitigate some of the incoming damage and allow you to use additional Life-reserving Auras. You are also going to increase your Armour Rating by Determination Aura and utilize the new Divine Shield Passive, which will quickly regenerate your Energy Shield based on the amount of Physical Damage mitigated. Combined with your Life Regeneration, you end up with a very tanky character, even though half of your Life is reserved on Auras, and half of your Energy Shield is removed by Energy Blade.

Overall, this build can get absurdly expensive, while it's definitely not the best out there. It's still most likely the optimal way to play this skill in Patch 3.16, and if you are really eager to try it out, this is the way it should be done. We can truly recommend it, as something completely new and Unique. Even though the numbers don't make this build look that powerful at all, it's very solid and enjoyable to play.

This build offers a very straightforward, basically one-button playstyle, even though it does utilize several complex mechanics. You are going to spin with your Cyclone which will trigger Arc to kill enemies all around your screen. You can also cast Flame Dash to avoid big damage spikes. You will be able to use Molten Shell and Vortex as well, which are both Instant cast spells and can be used while you are Channelling Cyclone. Molten Shell further boosts your Armor Rating, and grants a protective Shield, while Vortex is used to instantly kill enemies below 10% Life and occasionally grant Innervate buff.

You can start using Arc right from the start but leveling up with Energy Blade is pretty much impossible. This build, like any other Attribute stacking build, will not work at all on lower levels, so simply using a self-cast setup is way better. As Inquisitor, you will easily get enough damage and Resistance Penetration to get you going even with mediocre self-found equipment. The following leveling setup is most likely not optimal/fastest one, but we tried to include as many Skill Gems and Passives that you are going to use later on so that you don't have much respeccing to do, but then again, in most cases, this isn't going to be your first League character, so it's not that important to strictly follow the following guidelines.

After this point, just pick Lightning Spell Damage, Spell Crit, Cast Speed, and Life nodes until you decide you are (or your equipment is) for the respec. Some good examples are: Annihilation, Arcane Potency, Heart of Thunder, Breath of Lightning, Cruel Preparation, Blood Siphon, Assassination

Minor God: Soul of Gruthkul for 1% additional Physical Damage Reduction for each Hit you've taken Recently up to a maximum of 5%

Below you will find the recommended equipment for our Energy Blade Inquisitor Build. Generally, it's an attribute stacking build that requires you to get as much Strength and Intelligence as possible, so the gear will be rather expensive and will leave little to no space for experimentation. Overall, it's a NOT cost-effective build, but one that is definitely worth trying out because of various interesting mechanics and the most unique skill used. At the same time, it provides a very enjoyable playstyle, as most CoC/Cyclone builds do.