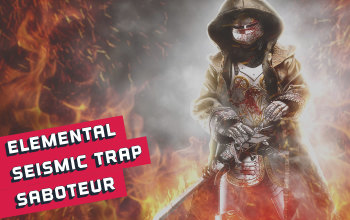 This version of Seismic Trap Saboteur is very similar to the vastly more popular purely Physical one. If you're familiar with it, then you'll have no problems with adapting or switching to this one. Converting damage has its virtues - there are more damage sources in both - gear and skill tree, it has the ability to apply Elemental Ailments, it's arguably cheaper, and you can use more Skills to further boost damage. The downsides are, that you won't be able to use Brutality Support, and it requires you to convert the damage first. The build deals mixed Elemental Damage, it's more focused on forcing an extra layer of it from the Base Physical Damage, and on increasing Critical Strike Chance and its Multiplier. Conversion is granted by Cold Mastery, which you can then again convert to multiple other damage types, including Chaos Damage.

Seismic Trap and Exsanguinate are Spells that are widely used at the start of a new league, due to their accessibility and overall performance. Seismic Trap activates upon triggering and lasts for some time, dealing periodically damage to the enemies in its radius. Exsanguinate is a Spell that can be made into a Trap and it's used mostly for clearing, as the Tendrils are very fast and aim automatically for opponents. The build utilizes defenses such as Magebane, Pyromaniac, and Born in the Shadows Keystones for Spell Suppression Chance, Immunity to Blind, Shock, and Ignite, Life Regeneration, and reducing damage from nearby, Blinded enemies. The character has a lot of Armour and around 4k of Maximum Life. The damage is great, it can reach a few million DPS with little to no investment.

Use the Exsanguinate Traps to deal with packs of enemies, it's a very efficient way of killing multiple enemies. For boss fights, place a few Seismic Traps so that they can deal consistent damage. Bear Trap with Culling Strike is a useful tool to enhance your other traps' damage, especially when fighting bosses. Use Molten Shell as your Guard Spell, For a Curse use Assassin's Mark, and as a mobility skill - Flame Dash. The Auras which we recommend using are Determination Zealotry, Hatred, Herald of Purity, and Skitterbots

Start with Explosive Trap, it's available since level 1 and ticks all the boxes to make it a solid Skill to start with. You could even use it in the final version of the build if not for the fact that Exsanguinate/Seismic Trap is better suited for clearing and for boss-killing. You can transition into the later version very late into the game after you have already acquired a good pair of gloves and other gear, and after you start noticing your build could use some upgrade. At first, prioritize added damage and damage increase, and later seek more Critical Strike Chance stats.

When dealing with the bandits you can either help Alira, or kill all of them. Alira grants resistances, mana regeneration, and critical strike multiplier - it's all useful.

72 Points Skill Tree
allocate Cold Mastery for Conversion, get the nearby Jewel Sockets, go for Charisma, Maximum Life, and the Trap Clusters

Major God: Soul of Solaris: 6% additional Physical Damage Reduction while there; is only one nearby Enemy; 20% chance to take 50% less Area Damage from Hits

We recommend using mostly Rare Items witch some Uniques sprinkled here and there. The most important will be adding more Elemental Damage sourced from your Physical Damage, and gaining more Critical Strike Chance and Multiplier. You won't have to convert your damage to Fire fully, it's of course useful, but don't focus too much on it - the added as Fire, or simply added Fire Damage is fine. Our setup deals mostly Cold Damage. Fire and Chaos Damage are equal, and the other types are more or less insignificant. We managed to convert almost all Physical Damage to Cold (with one Mastery and a craftable Gloves Prefix), but Cold Damage has priority, the game will try to convert your Physical Damage to Cold first, then to Fire, and then to Chaos. The Gem Level of Seismic Trap is also immensely important. for Defense, try to get Life, Evasion, Spell Suppression, and Armour. You might also go out of your way to gain more Strength.