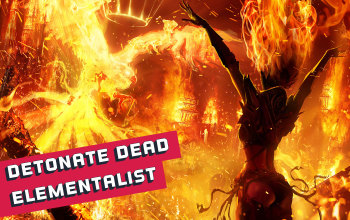 It's an Elementalist build that Ignites enemies by Detonating the Dead. An important part of the build is the Blackflame Unique Ring - Your Ignite Damage deals Chaos Damage instead, making it possible to increase your damage output by investing in Fire and Chaos Damage over time, both types of damage are massively widespread in such form. Elementalist's Ascendancy ensures that all of your Hits Ignite and Shock enemies, and greatly improve your Elemental Damage. To create corpses use Corpsewalker and Desecrate - you can guarantee to some extent that the Corpses you create have a lot of Maximum Life by having specific Spectres from your Raise Spectre Skill. The Damage of the Detonate Dead explosion is partially sourced from the Maximum Life of the targeted Corpse. The Enemies that you should turn into Spectres with a lot of Life are High Lithomancers from Primordial Blocks Map.

This build has simple but one of the most reliable defensive layers - a lot of Maximum Life and Energy Shield, Elemental Resistances at over 80%, and a lot of Armour for Physical Damage mitigation. Use Keystones such as Divine Shield and Corrupted Soul to make use of your Life and Armour, it will enhance the effectiveness of your ES. The Damage you deal is based on your Fire and Chaos Damage over Time, and the Corpses' Maximum Life which you have control over to some extent as mentioned before; it will have huge implications during boss fights. Bury in mind that the Price of Blackflame and other Uniques might be very high. Rare Items should not be too expensive.

It's one of the few builds that has been nerfed for 3.17. The chance to spawn your Spectres as corpses is now 15%, that's less than it was before but it is more consistent. You don't have to bring multiple different high-level Spectres with you as the chance to spawn one as a corpse is not relative to the total pool of available monsters - it's always 15% now. You can still inflict massive Ignites on enemies just as before, but it's not guaranteed to happen each time.

To consistently deal damage with Detonate Deat you will need an equally consistent source of Corpses, one of which is granted by Corpse Walk Skill from Unique boots Corpsewalker, another one is Desecrate cast automatically via for example Cast when Damage Taken. Detonate Dead and Vaal Detonate Dead Skills are used as the only damage source. Molten Shell is the preferred Guard Spell due to your abundance of Armour, and for Movement use Flame Dash and Withering Step which doubles as a source of Withered Debuff. Periodically use Bone Offering and Convocation to enhance your Minions, and for Auras, you should have active Malevolence, Determination, and depending on your preferences - Discipline, Tempest Shield, and/or Dread Banner. For Spectres use High Lithomancer and Stoneskin Flayer. Animate Guardian is a Minion that grants various buffs depending on the Items it wears, details about it will be provided in section 5 of the guide - Final Gems links.

It'd be easy to start as a generic Elemental Damage build and later specialize in Detonate Dead. Detonate Dead is available since level 1, but leveling can be faster with others Skills such as Burning Arrow. After allocating the first Ascendancy Keystone - Shaper of Flames you can focus more on Fire Damage over Time and Burning Damage. At Level 49 you can equip Blackflame and build up some Chaos Damage. Start using Detonate Dead as soon as you can get Spectres with a lot of Life such as the Giant Gladiator Statue from Act 3, and combine it with Desecrate.

67 Points Passive Tree
Get Searing Heat, Acrimony, Holy Fire, and Divine Judgment for Damage. Purity of Flesh and Devotion are used to increase your Maximum Life.

Corpsewalker and Blackflame are very important, other Unique items are heavily recommended. To increase your Damage look for Chaos Damage, Fire Damage, Burning Damage, Damage over Time, and Elemental Damage. You don't need Spell Damage as it won't affect Detonate Dead. In addition to that seek Minion Life mods to cause more Damage with your Spectres' Corpses. One of the best mods to increase your DPS are ones that make your Ignites deal damage Faster. For better defense try to get Maximum Life, Energy Shield, Armour, and Maximum Elemental Resistances. With this build, you will receive Hits more often than usually, Recouping Life and mods affecting you after you get Hit are particularly handy. For Attributes try to get Strength and a lot of Dexterity, some of your Gems require over 100 of it and your Passive Skill Tree does not grant you much.