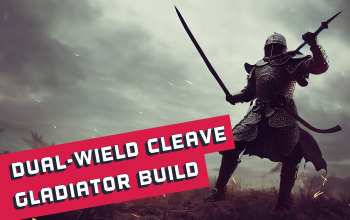 Cleave is one of the simplest Melee Attacks - available at level 1, it should be familiar to every player. If dual-wielding, the Attack is still performed once but the damage gets combined and reduced. It makes it good for this specific archetype - normally when attacking while wielding two weapons, it is performed in an altering fashion where you switch the weapon with each Attack, but here it's always 60% of the combined damage of both Swords or Axes. We're using two Paradoxica Swords with around 200 DPS (later doubled) each, but it is possible to get better weapons, one-handed Swords are generally known for their high potential DPS. We've settled on the Gladiator due to its Keystones that enhance the dual-wielding archetype, and other utilities. Outmatch and Outlast is the source of Endurance and Frenzy Charges on kill, more damage, and reduced physical damage taken most of the time. We also recommend the Arena Challenger for more Attack and Movement Speed. It's a non-crit Precise Technique build that deals only Physical Damage boosted with Impale.

There are many defensive layers this build can accommodate. We've pursued the Block Chance gimmick of Gladiator with its Painforged and Violent Retaliation Keystones. These not only grant high Block Chance but also provide much more Physical Damage via miscellaneous additions of Violent Retaliation. Versatile Combatant is an often-overlooked Keystone, but here it is a source of Spell Block Chance. You're able to reach a 50% Chance to Block both types of Damage, and that's on top of a very high Spell Suppression Chance and Armour - upgraded by Iron Reflexes, Endurance Charges, Determination, Fortify, and Defiance Banner. It's a very tanky build, able to withstand most of the Spell and Attack Hits. Unfortunately, there isn't much you can do to defend yourself against omnipresent Damage over Time, this type of damage can be eased with Flasks, Life Leech, and Pantheon choices.

The gameplay is similar to that of every Melee Build, you're using Cleave to deal damage, and Ancestral Totems for more Damage and Attack Speed during tough encounters. Leap Slam or Dash can be used as a movement ability. For a Guard Spell use Molten Shell. For Life Leech and Attack Speed be sure to always have Blood Rage active. For Auras use Pride, Determination, Blood and Sand, and Defiance Banner. A Curse we recommend is Vulnerability. You're also able to generate Rage easily with Vengeance linked up with Rage Support.

Cleave is not particularly the most popular option during the leveling, but surely it can be used as such. In order to level up your Gladiator quickly you can refer to our in-depth Leveling Guide for Duelists using Melee/Impale Skills and if you want to use Cleave, you should be easily able to adjust your setup using the information included there.  Just make sure to use the corresponding Weapons it requires, add a secondary DPS source in form of Ancestor Totems for example, and try to refrain from allocating Critical Damage Passives as they not only offer negligible bonuses early on but are not the recommended route in this particular setup.

28 Points Skill Tree
As you're using Splitting Steel, we recommend pathing through Fury Bolts, later to get more Maximum Life, Onslaught, Phasing, and Life/Mana Leech. Take the Jewel Socket if you have the Lord of Steel Jewel.

It is a Precise Technique Build, meaning you won't deal Critical Strikes, and your Accuracy must always be higher than the Maximum Life for the damage bonus. Most of the Items, if not all of them, are of Rare Quality. It allows you to easily cap Elemental or even Chaos Resistances and gain extra Spell Suppression chance. Accuracy can be found mostly in Gloves and a Helmet. Added Physical Damage can be gained from Jewelry. There's not much more you can do to gain more damage from the regular gear pieces, most damage comes from Weapons. You can go for the Paradoxica Weapon or Rare Swords with high base Physical Damage. You won't need any Cluster Jewels, but after reaching level 90 or so it will be the best option to gain more Damage. Remember to get a 100% chance to Impale, and if you can't fit all your Auras, be sure that you've tried to increase the Spell Reservation Efficiency by allocating masteries and nodes on your Skill Tree first. We've decided to use Swords and not Axes. If you happen to find good Physical Axes you can use them, but it would alter the Skill Tree significantly.