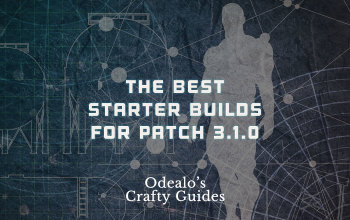 Find out what are the best starter builds for Path of Exile's 3.1.0 patch. Learn what builds benefit most from the recent content update

The Abyss League will be starting soon, and as usual Path of Exile will receive a major content update. To get you all prepared for the upcoming League we have decided to make a list of the best and most interesting builds for Path of Exile patch 3.1.0. This is our second list of this type, and this time it will include mostly builds that will receive a significant upgrade with the newest patch, introduce some new gameplay mechanics, or we have just found them to be the most interesting at this point. If you are looking for a more "classic" starter builds that are also fairly powerful you can find them in our previous list of Top 5 Starter builds for Fall of Oriath (all of them have been updated to patch 3.1).

Spectre Summoner Necromancer - with the Spectre persistence changes (meaning you no longer have to resummon them every time you log out of Path of Exile), and plenty of Support and Active skill gems introduced that are related to the Summoner Class in general, we believe this is the most interesting option in Patch 3.1 and the War for the Atlas expansion

Tornado Shot Deadeye/Ranger - the most classical approach to the Ranger class. Extremely powerful, and well-rounded build for fast farming mid to high-tier maps.

CwC Lightning Tendrils/Shock Nova Berserker - again, a lot of changes were made to the Lightning Tendrils, which render this skill viable in the CwC (Cast when Channeling) builds. With the new Storm Barrier Support gem, the Ralakesh's Impatience boots, this might be one of the most interesting (and powerful) builds to play in 3.1

Essence Drain Occultist - with the planned buffs to Contagion skill's AoE, the Essence Drains builds are becoming even more powerful. This was already one of the best picks for a Starter build previously, so right now, this build is even more suitable to be found on a list like that.

Lightning Strike Claw Inquisitor - this build provides one of the highest damage outputs in the entire Path of Exile. Going full crit/elemental, it utilizes the Inquisitor's Ascendancy Passives as no other build in the game. It is also extremely budget-friendly, being one of the cheapest builds to allow facing the Shaper and farming end-game content

We have selected builds that can be fairly powerful in end-game too. Turning this builds into the Elder and Shaper-slaying monsters you will need PoE Orbs investments of course, but just having this possibility should be one of the main reasons to pick the build.

If you have any suggestions, please leave them in the comments below.