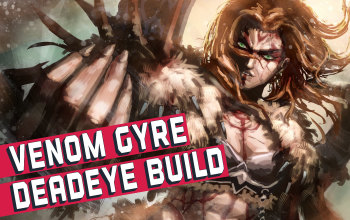 Venom Gyre is an increasingly popular Skill - a Projectile Attack to be used with Claws or Daggers that would be simple and straightforward if not for some unique properties. Fired projectiles will always return to the character, piercing all enemies on the way back, and can be caught and stored. You can once more fire the stored projectiles by using a separate movement ability - Whirling Blades. Projectiles fired this way cannot interact with enemies anymore by forking or returning, but can all hit one enemy no matter the quantity. It creates a powerful shotgun effect that allows one to quickly kill bosses by dashing through them a couple of times. You can store up to 30 caught projectiles and have a 40% chance to keep these after using Whirling Blades. This build is one for a Deadeye class due to the obvious synergies with these types of Attacks granted by Richochet, Endless Munitions, and more broad upgrades like Gathering Winds and Focal Point.

Here we don't use Crystallised Omniscience Amulet because building around it, and the amulet itself, are extremely expensive. It alters the items and skill tree completely, but skill setups and gameplay remain more or less untouched. Despite Venom Gyre having a lot of its base Physical Damage Converted to Chaos, none of these types of damage will be of use. Instead, the build focuses more on Elemental Damage gained via flat, added Fire, Lightning, and Cold Damage that can be found on a Weapon, Jewels, and Jewelry. It has a high Critical Strike Chance with Secrets of Suffering Keystone to Sap, Scorch, and Brittle opponents. For defenses, it utilizes Spell Suppression, Armour, Evasion, and Block Chance on top of around 4 to 5k of Maximum Life. It's not very tanky, but durable enough to withstand most of the attacks. It can be played as a started build.

Use Venom Gyre to clear maps and deal with bosses, with Fork Support you will always create tons of Projectiles and it is guaranteed to always have a significant amount of them stored up, so frequent usage of Whirling Blades is encouraged. For boss fights use Whirling Blades two to three times in point-blank range, fire Venom Gyre a couple of times to store them again, and repeat the process. Link Whirling Blades with Cast on Critical Strike, Flame Wall, and Tornado. For other offensive buffs, you can use Ancestral Protector, Berserk, and Blood Rage. To apply exposure use Hydrosphere. A Curse we recommend is Sniper's Mark. For Auras - Precision, Determination, and Wrath.

Venom Gyre requires level 12, before that use Cobra Lash, it's the most similar Skill. It's actually more comfortable to level up with, but that's arguable. Venom Gyre will be good too but bear in mind that you will rely more on Physical and Chaos Damage at first, that is before you acquire a good Claw. As the name of the Skill suggests, we recommend making it a Poison Build. Invest your points into one Poison Cluster, and with Skill Gems, you should be able to have a 100% Chance to Poison. You can then specialize in Claw Damage, Attack Speed, Maximum Life, and Evasion, and so when the time comes to switch to Elemental Damage, you won't need to revert much of your Skill Points. Venom Gyre has Converted 60% of Physical Damage to Chaos, the rest can be Converted via Chaos Mastery.

The most efficient setup consists of Rare Items, but there are quite a few popular Uniques you can use too. It makes the build easy to assemble, but expensive to min-max. The most important will be added Elemental Damage and Critical Strike modifiers, most commonly found on a Weapon, Jewels, and Jewelry. You will also need some extra Strength and Intelligence for Gems and Gear. For defensive stats seek Armour, Maximum Life, Resistances, and Spell Suppression Chance. You should be able to achieve a 100% Critical Strike Chance eventually. Aim for around 5000 Maximum Life, getting more would be too difficult.