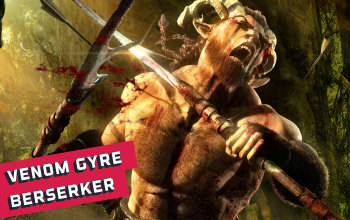 Venom Gyre offers one of the most unique gameplay experiences. It's a Projectile Attack that returns to you at the end of its lifespan, and if you catch it, you can store and then "re-cast" it in a new way by using Whirling Blades - you can hold up to 30 Projectiles this way. The Skill directly synergizes with Whirling Blades specifically, the Projectiles which are fired by this movement Attack behave differently, as they don't return and travel in a different pattern. It results in a rapid movement of the character in order to release the stored Projectiles systematically, but in such a predictable pattern to catch them again, making it a slightly more difficult build to play when compared to other similar builds. Venom Gyre has the inherent property of converting 60% of its Physical Damage to Chaos and having a 40% Chance of Poisoning on Hit. It's all irrelevant here for we focus on dealing Chaos Hit Damage with a high Critical Strike Chance, by using Replica Alberon's Warpath Unique Boots. These add flat Chaos Damage to Attack per Strength, and the base damage of your Skill or Weapon pales in comparison to the damage sourced from these Boots.

A good way to improve the DPS of any Attack build is to play as a Berserker, pick the Flawless Savagery for Critical Strikes with added Damage, Blitz for a dynamic Attack Speed bonus, War Bringer to gain Rage, and Aspect of Carnage for simply more damage. Your most important objective will be to stack Strength - with this Attribute comes a lot of flat Damage via the previously mentioned Boots. Another important component will be to increase the existing damage. To do so you will use Iron Will to gain Spell Damage sourced from Strength, and Battlemage's Cry which temporarily makes increases to Spell Damage apply to Attack Damage. By using two Forbidden Jewels you can allocate Juggernaut's Undeniable Keystone for more Attacks Speed sourced, again, from your Strength. For defenses, the built uses its vast Life Pool, Fortify, high Armour, Evasion Rating, Block Chance, and Spell Suppression Chance. With the Purity of Elements, the character is also immune to Elemental Ailments.

The attack pattern differentiates depending on the content you're running. When mapping just use Whirling Blades regularly to move forward while attacking with Venom Gyre as you see any opponent - your Projectiles will Chain and Fork, reaching all the enemies with ease. During Boss fights, you will rapidly dash forward and backward with Whirling Blades - the stored Projectiles are able to "shotgun" an enemy if you stand really close to it. With Sniper's Mark, Fork, and Chain (from Divergent Venom Gyre), you will create more Projectiles. The number of Projectiles, especially the returning ones is very important for single target DPS. Tornado will help you with bosses too, your Projectiles will Chain off of the Tornado and Hit the target. It should be cast automatically. Use Battlemage's Cry, Ancestral Protector, Blood Rage, and Berserk for a damage boost. To apply Withered debuff it is recommended to have an Anomalous Withering Step. For a Guard Spell use Molten Shell, and for Auras - Determination, Grace, and Purity of Elements.

It's not recommended to level up with Venom Gyre as it's only good later on when you're able to quickly and consistently use it with Whirling Blades and generate tons of Projectiles. Your final Skill Tree is also very distinctive, unlike in any other build. We recommend an Attack that would take advantage of the nodes usually found at the bottom of your Skill Tree, which would minimize the number of Orbs of Regrets you will have to use later. Splitting Steel is the most preferable Skill - it's a Projectile Attack that can Impale and has great AoE. Use it with a Redbeak Sword to deal Physical Damage. It's one of the best leveling setups in the game. You will switch to Venom Gyre at around yellow maps and 1000 Strength, and with all the mandatory Items already in your stash - Replica Alberon's Warpath and Redblade Banner.

33 Points Skill Tree
Go for the nearby Life and Accuracy nodes, the head for Art of the Gladiator and Blade of Cunning

It's a Strength-stacking build, you will need a lot of it, up to around 2000. Strength will grant you more Block Chance, Damage, Maximum Life, and some other bonuses depending on your gear. You can get the increased Strength Implicit modifier on all of your Synthesised Jewelry, which makes the build potentially very expensive. Attack Speed and Critical Strike modifiers are also very impactful. For defenses seek Maximum Life and Spell Suppression Chance - you can also stack up some extra Dexterity due to Magebane's effect. Also, try to gain some Armour and Evasion Rating, the Auras alone won't grant you much of it. The build uses many Unique Jewels and three Unique gear pieces - Redblade Banner, The Iron Fortress, and Replica Alberon's Warpath. The Boots are very expensive so make sure you can afford them. A Pair of Forbidden Jewels for Undeniable is heavily recommended, it grants a lot of Attack Speed and Accuracy, which otherwise you would have to gain by other means. You will probably need to craft the reduced Mana Cost of Skills modifier into your Amulet and Rings, as it will be a major issue. Gathering enough Attributes shouldn't be an issue, but keep in mind that the build requires 111 Intelligence.