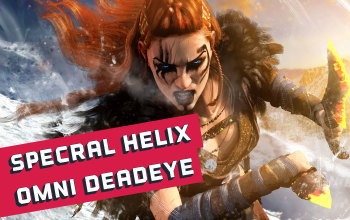 Spectral Helix is an Attack Skill Gem that uses your weapon as a ranged Projectile spiraling outwards from its initial attack position. With Trinity Support you will need to keep track of what type of damage you're dealing, it should be Cold and Lightning, as Lighting Damage has typically extremely wide values on its lowest and highest damage with Hits. Another part of the build that makes it stand out is the usage of a Unique Amulet added in patch 3.17 - Crystallised Omniscience. The Amulet completely changes how your Attributes work; normally Strength grants you Maximum Life with increased Melee Physical Damage, Dexterity provides you with increased Evasion and added Accuracy, and Intelligence - Maximum Mana and increased ES. Now you gain instead Elemental Resistances and Elemental Resistances Penetration. The Attributes requirements on your Skill Gems and Gear are applied to Omniscience - the one single Attribute that is a result of all of your original three Attributes from Modifiers combined.

You're still able to have Strength, Dexterity, and Intelligence from your base Character statistics, but the quantity of it is negligible. You can now stack any type of Attribute - preferably Dexterity as it's the closest to your starting location and the Utmost Swiftness bonus grants you more of it. You won't have to worry about Elemental Resistances, these should be capped easily by Attributes. It is an attribute-stacking build, but you won't need to focus entirely on these - remember that your Elemental Resistances are soft-capped ad 75%, and Negative Elemental Resistances is capped ad -200%. You will now have to source Evasion Rating, Accuracy, and Maximum Life from your Gear and Skills.

Pick Deadeye Ascendancy - it's great with Projectiles, especially with Spectral Helix as you can take Far Shot. With Focal Point, Mark the Prey, Marked for Death, and Mark Masteries, your Assassin's Mark is very effective. It's the source of almost half of your total DPS. Use a Claw - you have easy access to great Claw clusters on your side of the Skill Tree. Claws also provide you with Mana and Life on Hit. Your Defences are quite good - despite no inherent bonuses from Dexterity you will still have a lot of Evasion Rating - 10 to 20k, some Armour, Wind Ward with Gale Force, Ghost Dance, Block Chance, Spell Suppression Chance, Tailwind, Elusiveness, and 4 to 6k of Maximum Life.

The only Attack that the build uses to deal with opponents is Spectral Helix. It's clunky to use for map-clearing, but it can be supplemented with Tornado and Hydrosphere cast automatically. Use Whirling Blades as a movement Skill and Steelskin as your Guard Spell. For Passive Skills use an Aura for Added Elemental Damage to Attacks such as Wrath, Grace for Evasion, Precision for Crit. Chance and Accuracy, Defiance Banner for Armour and Evasion, Determination for Armour, or Herald of Ice for more damage and better clear speed. During boss fights, it is recommended to have Ancestral Protector. The best Mark you can use is Assassin's Mark linked with Mark on Hit Support.

Use Spectral Throw and at level 12 switch to Spectral Helix. You can pick any Projectile Attack that can be used with Claws, but Spectral Helix seems to have the highest damage. Initially focus only on Cold Damage as it's very easy to get for a Ranger, you can later implement Trinity. Try to get more added Physical or Cold Damage, you should convert a portion or the entirety of your Physical Damage to Cold with Mastery and Aura Skills or Items. Crystallised Omniscience can be equipped after you have enough Accuracy with Precision.

Crystallised Omniscience is the core element of the build and there are no other Uniques you should seek. The obvious stats to look for are Attributes, especially Dexterity - these grants you Elemental Resistances and Elemental Damage Penetration. You should obviously get a 100% Hit Chance with enough Accuracy and capped Elemental Resistances, with Assassin's Mark your Critical Strike Chance should be 100% as well. The Critical Strike Multiplier is very high too - it's 700% or so. The majority of it comes from Mark, so on your gear you should focus more on added and increased Elemental Attack Damage for Projectiles. Remember to balance your Elemental Damage with at least two different types of it - Lighting and Cold are obvious choices. Suffixes on your gear - which are normally used for Resistances can now be used for other purposes given that you have a lot of Omniscience.