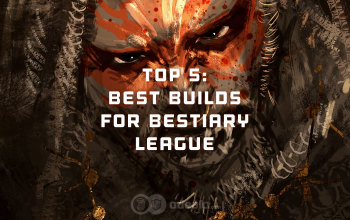 Find out what are our recommendations for Path of Exile's Bestiary League and patch 3.2. Include completely new builds and old reworked ones

Patch 3.2 is way more than just a regular new League/Content update. It brought us a lot of new items, new skills, crafting options and all the Ascendancy classes have been also reworked. Those changes open up a lot of new build possibilities and definitely alter the meta. Hierophant who has been a rather niche class is now the one that has received the biggest buffs in Patch 3.2 and most likely it will be one of the most popular classes in the Bestiary League.

Righteous Fire Totem Hierophant - Hierophants will most certainly rule the Bestiary League. This is the class that has received the most significant buffs in patch 3.2, and also the new fated Atziri's Reflection shield completely nullifies the downside of using Soul Mantle unique Body Armour

Lightning Bladefall Totem Hierophant - considering Hierophants are one of the most OP Ascendancy classes in Patch 3.2 it is just natural that we can see another Totem build on this list. This is a nearly full lightning conversion build that provides insane damage and area coverage

Tornado Shot Raider - with the 3.2 buffs to Raider's class this shows up as the most powerful Ranger Ascendancy for the Tornado Shot build

We hope you can find something interesting for you on this list. If you have any suggestions about other interesting builds in Patch 3.2 please let us know in the comments below.