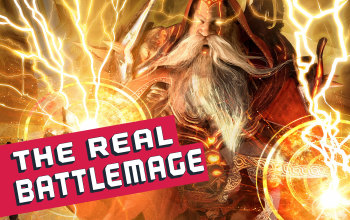 Fireball is the most iconic Spell in the fantasy genre ever existed. Many in their childhood often imagined epic adventures and battles fought by powerful mages who bring destruction to the battlefield with their powerful magic. With this Build, our goal was to fulfill this fantasy, but don't worry if you are not into roleplay, the build is very capable on its own!

Fireball in Path of Exile is a very simple Spell - you throw a ball of Fire at your opponents until they die. At the end of its destination, the Fireball explodes dealing Damage to every Enemy in a rather small Area of Effect around it. Those explosions can overlap with a single enemy, but it's more of a neat trick instead of a reliable tactic to increase your single-target Damage.

To further deepen our bonds with an image of a mage devoted to their cause, we utilize the Fanaticism mechanic. It is a unique tool available only to the Inquisitor ascendancy, which greatly reduces Mana Costs as well as boosts your Cast Speed and Area of Effect if you alternate between casting Spells and using Attacks. Fortunately, you do not need to undergo any muscle training to do that, you can simply integrate Leap Slam or Smite into your regular gameplay to have this Buff almost all the time. To trigger the Fanaticism Buff, you have to reach the maximum amount of Fanatic charges, and you can obtain them while the previous Fanaticism is still active. Thanks to this, you can either prepare a very powerful 4-second burst, paired with various buffs from being Focused, or continuously interrupt your Casts with Leap Slam to get solid sustained DPS.

As every righteous Inquisitor, we completely ignore enemy Resistances with the help of our Inevitable Judgment. That means we cannot lower their Resistances into negative values, making them more prone to that type of Damage, but it also means we don't have to do it in the first place.

Battlemage granted by another Inquisitor Ascendancy Passive is a very interesting mechanic that adds all the damage from your Main Hand Weapon to your Spells. Fireball has one of the best Damage Effectiveness in the game, as high as 370%, making it a great candidate for this mechanic.
Pinpoint is an amazing Support Gem that adapts to the situation. When you clear the map, jump around using Leap Slam, don't cast that often etc, it adds additional projectiles to your Fireball, but when you encounter a tough enemy and start continuously casting, it reduces the number of Projectiles in exchange for a great Damage boost.  Unfortunately, we cannot make use of additional Intensify levels available via Passive Tree Mastery, because it reduces the number of projectiles to a literal 0. With the Dying Sun Flask, you will still have enough projectiles, but we find that Flask to be unreliable in longer fights.

Another unusual aspect of this Build are the Elemental Ailments. Instead of regular ones, we decided to use alternative versions available through Secrets of Suffering. The most important one is Brittle, which increases Base Critical Strike Chance by a flat amount, up to 6%. It doesn't sound like that big of a deal, but in practice it doubles our total Critical Strike Chance, allowing us to reach 100% Chance very easily. The Sap is also very useful, as it decreases the Damage dealt by the enemy. Scorch has no use for this build as we ignore Elemental Resistances anyway.

As our defensive layers, we choose to specialize in high maximum Life and Armour Rating. with a bit of Energy Shield on top of that.  We also use Glancing Blows with a decent amount of Block Chances - it's not block capped but you can opt for a more defensive setup with a Shield instead of Dual Wielding. Thanks to the Corrupted Soul from Timeless Jewel, half of the Damage we take splits into Life and Energy Shield, allowing you to recover both of them at once.

This Build uses almost only Rare Items, so only you decide on its budget. It works quite well with just regular Rares, but if you invest in better Rares, your Character will accordingly become stronger. We wouldn't recommend it as a League starter, as the market for some of those Rares is quite scarce during the first days.

During regular Mapping, you don't have to worry about Fanaticism Buff at all, you can just spam your Spells and move around using Leap Slam. To quickly take down the Bosses, you will want to use Smite and Arcanist Brand which will trigger Sniper Mark and Flame Wall on the enemy. Tornado is also a very powerful tool, which you can automate with a proper Helmet modifier. Taking full advantage of Fanaticm Buff might take a while to get used to, but it's a very interesting and rewarding playstyle.

Leveling a Spell Caster Templar is a breeze. You can start using Fireball from the very beginning, but you can also choose to use other Spells, especially the ones that don't need additional Projectiles from Support Gems to have good clear. There are many very powerful Uniques for low-level Casters - as always, Tabula Rasa is the best Item you can get to improve your Damage early on. Pair of Axiom Perpetuums will allow you to spec into Critical Strikes very early into the game.

Kill all Bandits to get additional 2 Passive Tree Skill Points

Preferably in this order:

Major God: Brine King: You cannot be Stunned if you've been Stunned in the past 2 seconds, Cannot be Frozen, 50% reduced Effect of Chill on you

Minor God: Soul of Abberath: 60% less Duration of Ignite on You; Unaffected by Burning Ground

This build uses only a few Unique Items, and the rest of them are Rare. You will use two different kinds of Weapons: a pretty typical Spell Caster one, and one suited for Battlemage, so with a lot of Flat Elemental Damage and some useful modifiers for a Caster. It will be pretty similar to the Weapon made for an Attack Build, except you still want Cast Speed instead of Attack Speed etc. Prioritize the Cold Damage on this Weapon, as it affects the Brittle Effect, which is very important for your overall Damage.
You will have to get Secrets of Suffering to get access to  Alternative Elemental Ailments - the best way to do so would be to use the Alternating Sceptre as a Base for one of your Weapons, but you could also use The Interrogation Unique Jewel at the cost of additional Passive Skill Points. If possible, all your Gear should be Hybrid Armour and Energy Shield based to improve your Defences. Having mostly Rare Equipment lets you heavily customize your Gear and adjust it to your budget. It also lets you reach high Maximum Life on this Build, as Uniques often lack this modifier. Passive Tree lacks Dexterity, so you will have to cover those requirements with your Gear.